Kaitlynn Holmes had already bought her cap and gown.

Having graduated with a master’s degree in applied behavior analysis through Ball State Online, the Connecticut woman had already planned on driving from the East Coast to the heart of the Midwest for Spring Commencement. So, when the emerging COVID-19 pandemic forced University administrators to cancel the event, Kaitlynn didn’t let it get in her way.

This July, she made the 24-hour round trip anyways.

Plenty of people questioned why. But Holmes had come too far in her education not to mark the occasion. And her experience with Ball State had been so satisfying, she felt like she had to see the campus in real life.

Sure, she couldn’t exactly paint the town Cardinal red once she got here, but it would still be an adventure.

“This is the final year of schooling in my entire life. I wanted to celebrate that moment. I thought that I could at least parade around in my cap and gown and see the university that I attended. So, I did it.”

After graduating from Ball State this May, Holmes then passed the Connecticut board exam on July 27 and earned state licensure. She can now proudly say she is a board certified and licensed behavior analyst. 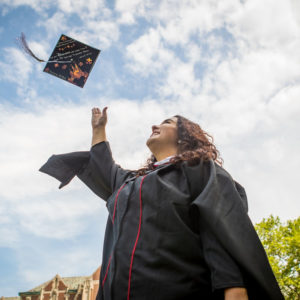 Holmes’ experience with Ball State had been so satisfying, she felt like she had to see the campus in real life.

Behavior analysts develop plans to help children who are having behavioral issues and often train parents, teachers, and others how to implement the plan.

“It’s about making that child’s quality of life better as a whole,” she said.

Behavior analysts can work in a variety of settings, but Kaitlynn hopes to work in a school district, preferably with elementary or middle-school children.

Holmes first heard of Ball State about three years ago. At the time, she was a registered behavior technician in a public school in Connecticut, working under the supervision of a certified and licensed behavior analyst.

Holmes wanted to move up and become a behavior analyst herself.

“I literally searched on Google for universities that had high passing rates for the behavior analysis exam,” she said.

She found a website that ranked Ball State near the very top. She did some more investigating and realized that the University offered online instruction that would allow her to work and attend school at the same time. Finally, she asked around about Ball State in a Facebook group for behavior analysts and her colleagues gave the program rave reviews.

“I ended up loving the program. It was convenient for me to work full time while also attending grad school.”

She was equally satisfied with her road trip.

Campus was beautiful, and so was the Midwestern countryside, she said. The farms and fields that Hoosiers take for granted were new to Kaitlynn and represented an almost idyllic landscape.

“It was just a really pretty drive. No complaints.”