During the season, a typical Friday has him rising at 6 a.m. and teaching history classes throughout the day, followed by an evening schedule that includes not just the game but a team meal, a pre-game regimen, and post-game activities. For Coach Hargitt, the Friday night lights don’t go dim until around 2 a.m., following a careful review of game film.

That Friday night schedule—plus daily practices and weekend coaching meetings, not to mention summer leagues—is normal for coaches at the high school level, says Hargitt, who has worked as both head coach and offensive coordinator for schools in Illinois, Indiana, North Carolina, and South Carolina, producing school record holders in rushing and passing along the way. 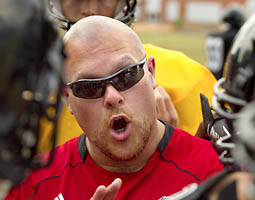 “I now network through the Internet with coaches around the country on a myriad of topics that help me improve my coaching.”

Today, Hargitt is passing game coordinator and quarterbacks coach for Nation Ford High School in Fort Mill, South Carolina. During his first season with the Falcons in 2011, his team advanced to the state’s AAA playoffs for the first time. His quarterbacks put up some of the best numbers in the state.

“I wanted something to help me advance in the coaching world,” says Hargitt of his search for a master’s program.

Hargitt was a grad student when his professor, Dr. Kimberley Bodey, advised him to revise a paper and submit it for publication. The article eventually appeared in a physical education journal with Hargitt and his professor as co-author.

Hargitt credits Ball State faculty with giving him the drive to publish. Since graduation, he has contributed to coaching journals and produced a six-part DVD series, The Spread Wing-T Offense. He is co-author of a manual which details the spread wing-T. A second book, 101 Air Raid Plays, and four more videos are scheduled for release in the summer of 2012.

“For all of this, I thank Ball State and Dr. Bodey and [program coordinator] Dr. Larry Judge for suggesting that I publish that first journal article,” he says. “I am not sure any of that would have happened without the encouragement that I received from the program.”

Hargitt also liked the fact that professors required students to collaborate with their online classmates. He says the interaction with coaching peers brought class material to life and put him in the habit of networking.

“I now network through the Internet with coaches around the country on a myriad of topics that help me improve my coaching,” he says.

Hargitt, who earned his bachelor’s in history education degree at Illinois State University, says the online format made it possible for him to pursue graduate education.

“It was not an option to drive to a campus and sit there for class,” says Hargitt, who, at the time, was teaching a full load of U.S. history classes, coaching football as well as track and field, and fulfilling the roles of husband and father.