Had teachers, coaches, and mentors not rallied around him, Brian Dinkins might not have graduated from high school on time to play out a football scholarship to Purdue University, where he played four winning seasons, including a trip to the Rose Bowl, with a teammate named Drew Brees.

Despite the bachelor’s degree on his résumé, Brian returned home to where his mother raised him, one of the most dangerous neighborhoods and impoverished school systems in Indianapolis. Lack of a job soon meant lack of a home. That’s when a stint at substitute teaching changed his life forever.

His Opportunity to Make an Impact

“I saw an opportunity to have an impact so I invested in education so I could teach,” says Brian, who also became interested in leadership and pursued a master’s in educational administration.

Over the next several years, he taught special education and filled multiple positions as principal, athletic director, and dean of students.

“I had gone to school with the parents of a lot of the kids in my school,” says Brian. “It was an epiphany for me to realize the families were still in the neighborhood. Somewhere along the path they hadn’t connected to something that would change their experiences—or their children’s experiences.”

Children Can Become Casualties of Society

Brian is adamant about children “acquiring skills to move outside of their circumstances.”

“Otherwise they inherit broken lives as innocent casualties of society,” he says.

“I believe achieving the highest level of education is a testament that we can achieve anything we put our minds and hearts to,” he says. “This is especially important for children raised in poverty like myself to see that you can achieve every goal you set for yourself.”

Completing a doctorate in educational leadership has been Brian’s primary goal. After finishing Ball State’s specialist in education in school superintendency in 2015, he undertook the EdD in educational administration and supervision. 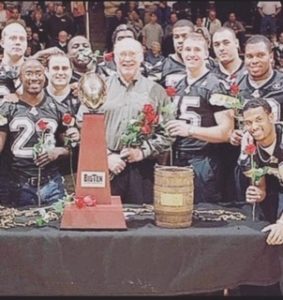 Dinkins (far right) and Brees (to his right) and Boilermakers surround the 2001 Big Ten trophy.

“The EdD program has enhanced my capacity to lead with an inclusive mindset,” he says. “The Teachers College does a great job of exposing its students to best practices that encourage and celebrate diversity, inclusion, and equity.”

Brian says Ball State faculty and staff have become part of his family. He admits that he decided to quit the EdD more than once, “only to have faculty come and get me.” With his dissertation research underway, he plans to graduate in 2020.

In 2015, Brian, in his own words, “took a leap of faith” and launched an organization he calls National Institute for Child Empowerment (NICE). Through NICE, he pursues his passion for helping parents and students of disenfranchised communities with training, mentoring, and advocacy to increase their access to college, careers, and character development.

“Education has empowered me to serve some of the most challenging schools in the inner city of Indianapolis and provide love, hope, and quality education to those most in need,” says Brian, whose organization provides leadership coaching, workshops for parenting, and professional development for teachers.

“It takes the commitment and excellence of every teacher, counselor, parent, and administrator to ensure that all students succeed. Education is truly the doorway to providing all students personal and professional empowerment.”

Brian says he lives by the words of abolitionist Frederick Douglass, who wrote, “It is easier to build strong children, than it is to repair broken men.” 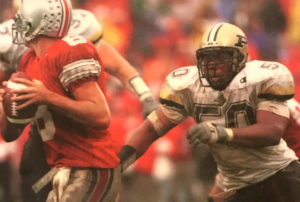