When Josh Michael was 18 he set out to do what most other high school graduates did at that time: go to college. He moved to Indianapolis in pursuit of an associate degree in computer aided drafting and eventually found a career in sales.

Fast forward 10 years, and Josh found a new calling: to serve his country. Even though he would be older than 80 percent of his battalion, he joined the Army as an infantryman and soon deployed to Afghanistan to fight on the frontlines.

In 2011, Josh’s unit was deployed to Logar Province, one of the most dangerous areas at the time. With only 20 days remaining in his deployment, he took a direct hit from an 82mm mortar round. The blast destroyed his left elbow and knee, and also left him with a traumatic brain injury. It took a year and a half at Brook Army Medical Center in San Antonio, Texas to recover from his injuries before being medically retired with a Purple Heart.

But that’s not the end of Josh’s journey.

“I wanted the best.”

Having had sales experience before joining the Army, Josh was fortunate to find employment with a company dedicated to hiring military veterans.

“When I retired [from the Army] my company hired me right away,” says Josh. “It was very challenging to transition into a civilian job. They let me work a few hours a week, while I was still recovering, to get to know the company.”

But the sales profession is competitive. Josh knows this. He often times describes his career as “high pressure.” So, when he decided it was time to use his GI Bill and earn his bachelor’s degree, Josh knew he couldn’t afford to put his career on hold.

Ball State University’s online bachelor degree programs provided Josh with the option to further his education – with the same academic rigor as on campus – while also continuing his career.

“There are many online schools that offer a bachelor’s degree in business administration,” says Josh. “But I wanted a school with a strong reputation as a university, not just an online school. I wanted the best.” 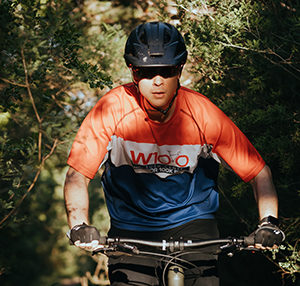 Josh leads a very busy life. In addition to his full-time career and course load, he’s a husband, mountain biker, and an active churchman. So, discipline – which his military career taught him – is one key to this balancing act.

“Balancing life is a difficult mission for anyone. I have learned to be efficient by embracing the challenge,” says Josh. “I would like to do other things, but my end goal is to be a positive impact on society. Being a well-educated veteran is the best way I know how to do that.”

Another key factor to Josh’s balancing act is the support of his academic advisor, Laura Waldron. He notes that the degree completion timeline is very important to him. Working with Laura has helped him strategize his course load, based off his job’s schedule, and remain on track to graduate on time.

“Josh and I connect regularly throughout the semester … and we discuss what is going well for him or questions he has,” says Laura. “He works tremendously hard to balance life, a full-time job and a full academic load, and he does it well. He’s incredibly driven to complete his degree in four years and he sets very high standards for himself and his course work. I am very proud of him.”

Even though there’s only 24 hours in a day, Josh makes his schedule work, and advises others that they can, too.

“You will be surprised how much time you have for school when you make it a priority,” says Josh.

Since Josh is always pressed for time, he enjoys how Ball State’s online bachelor’s in business administration program has allowed him to work at a pace and in an environment that is best for him, where he can focus without many distractions, other than his dog Lieutenant Colonel Bunker.

Plus, having to commute to campus wouldn’t leave much time for Josh’s mountain biking excursions. His involvement with mountain biking began as an opportunity for physical fitness and therapy, but it became something more.

In 2014, Josh was selected to join former President George W. Bush for the George W. Bush Presidential Center’s Military Service Initiative’s Warrior 100K (W100K). The W100K is an annual 100-kilometer mountain bike ride for U.S. military servicemen and women who have been wounded or injured since September 11, 2001. Josh has participated in every ride since.

Adding to this experience, President Bush published “Portraits of Courage” in 2017. The book is a collection of portraits he painted of veterans he had met throughout his life. Josh was one of 98 veterans selected for this honor.

May 2020 will bring more well-deserved and hard-earned honors for Josh: graduation and a bachelor’s degree in business administration.