When Erin Gilreath, a 2004 U.S. Olympian in the hammer throw, began to consider life after world competition, she wasn’t just looking for a “good” graduate program in coaching education. She wanted a master’s degree that carried the description of “world class.” 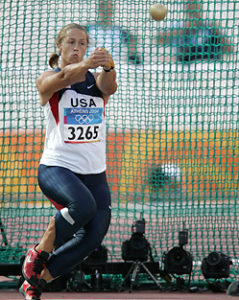 “Their (professors’) experience at some of the highest levels of the sport give students an insider’s perspective that they might not otherwise have.”

“The biggest draw for me to Ball State was Dr. Larry Judge,” says Gilreath, praising the coordinator of master’s in coaching education program at Ball State. “His reputation drew me to Ball State. He’s an outstanding teacher and a tireless researcher, and he sets high standards of performance for his students.”

Judge coached Division I schools for nearly 20 years and is considered the country’s premier coach in track and field throwing events. And he’s just one of a number of Ball State professors who have won national and international recognition in the field of coaching education.

“Their experience at some of the highest levels of the sport give students an insider’s perspective that they might not otherwise have,” says Gilreath, who today is assistant track and field coach at Indiana State University in Terre Haute, Indiana.

She liked the fact that the program, delivered 100 percent online, covered everything from physical preparation and conditioning to philosophy and ethics.

“Ball State has designed the curriculum to be thorough, covering the eight domains of coaching,” says Gilreath.

The eight domains are critical areas of coaching competency identified by the National Association of Sport and Physical Education (NASPE).

“They provided a ton of feedback on my assignments,” she says, “and if I had a question, they responded within 24 hours.”

She also had the opportunity to coauthor articles for publication with Judge.

“The résumé I built up with Dr. Judge during my tenure in the coaching program exceeded all of my expectations,” says Gilreath. “The research projects I worked on really helped me understand the science behind coaching.”

When Gilreath enrolled in the program in 2009, online study was ideal, since she was still training full time, coaching track part time at another university, and working at track camps during the summers.

Gilreath earned her bachelor’s degree from the University of Florida with a major in Spanish and a minor in linguistics. As a Gator track and field star, she won a national title, winning the weight throw with the third best throw in collegiate history.

Gilreath graduated with her master’s in coaching education in the spring of 2011. Just a few months later, she received her first full-time coaching offer from Indiana State.

“The Ball State experience has absolutely helped me achieve my coaching goals,” she says. “In terms of my coaching and my expectations, I feel like I’m giving my athletes a real Division I experience.”