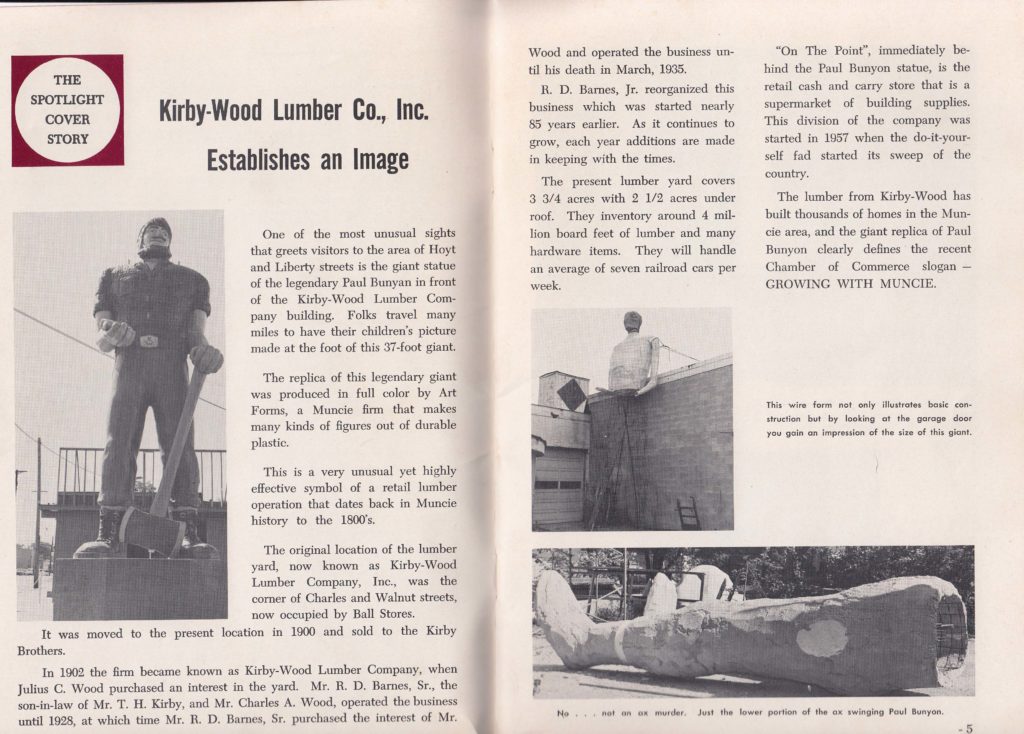 Did you know that the Timbers Lumber Jack has been a figure in our community for many years?  In August of 1965, the Kirby-Wood Lumber Company unveiled their icon image, a hand-painted steel, plastic, and fiberglass Paul Bunyan statue. When the company closed, the statue stayed on the property until 1993 when it was sold to Ralph Kennedy and moved to its new home on the corner of Tillotson and Kilgore. 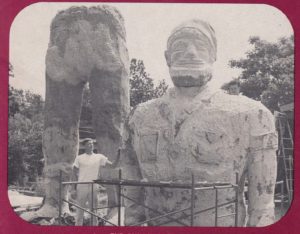 Originally founded in 1820 as the Kirby Lumber company, this prominent local family business served our community for over 150 years. In 1902, the Kirby Lumber company became known as the Kirby-Wood Lumber company when Julius C. Wood purchased an interest in the yard. Up until that moment, the company had been run by the Kirby brothers, Thomas Hickman, John, and George Kirby. At the turn of the 20th century, the Kirby family was as influential as the Ball Brothers in the history of Muncie. Kirby Avenue, The Kirby House and The Kirby Hotel, are current locations and distant historical memories, that are part of Muncie history for many different reasons. The Kirby family consisted of numerous men and women who helped develop Muncie into an industrial city from the late 1800s to the early 1900s, and their influence on the city remains to this day.

One notable member of the Kirby family is Edith Elizabeth Kirby Barnes.  Edith was born on January 21st, 1875 in Muncie to Thomas Hickman Kirby and Anna Cassady Kirby. Her father was a Union Army veteran of the American Civil War and spent much of his youth traveling across the country, even spending time in the California gold mines.   Her paternal grandfather, Thomas Kirby, was one of Delaware County’s earliest European-American pioneers, arriving in Muncie in 1830 peddling goods from a company in Dayton, Ohio. He started his own general store in 1831. At the time, this was the second store in town and before the natural gas boom of the 1880s.  Thomas built the oldest residential home still standing in Delaware County located at 1353 East Jackson. In 1871 Thomas left his general store business and founded the Kirby House, the popular downtown hotel and business center. Located on Main Street across from the current Muncie Civic Theatre, the Kirby House was where gentlemen of the time conducted their business. The Ball Brothers were boarders of the hotel until they married, Susan B. Anthony was a guest for a night during a stop on her woman’s suffrage lecture tour, and women’s clubs and societies would meet in the reading room.

Like most women of her class in this time period, Edith was involved in local women’s clubs and societies. She makes frequent appearances in the society pages of local Muncie papers, generally attending card games, teas, and luncheons.   A notable club that Edith took part in was “The Harlequins” which was founded at her home in 1892.  According to one article, it was a club for “old maids”, and per the rules, none of the members could marry after they hit the age of an “old maid” (this specific age was never clarified).  Interestingly, her father, Thomas Hickman Kirby, also formed an old bachelor’s club with seven other Muncie men in 1858, a club in which they vowed to never marry.  One could imagine that Edith may have been inspired by her father’s club to form the old maid’s club. 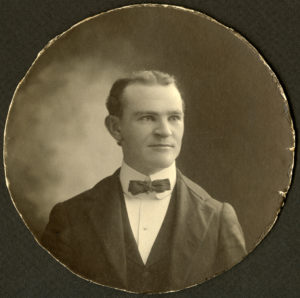 Edith eventually married—at the age of 25, no less—to Robert Denver Barnes, Sr., on June 21st, 1900. Sometime after their wedding, they moved to the Colorado Springs, Colorado area where Robert worked in his family hardware business. In 1905, they welcomed their first child, a daughter named Ann Cassady Barnes, who died in infancy. A year later, they returned to Muncie, where they welcomed their second child, a son named Robert Denver Barnes, Jr.

Upon her return to Muncie, Edith became active in many local clubs and events. She was a member of the Daughters of the American Revolution, Paul Revere Chapter where she filled elected positions such as historian, registrar, and chaplain. She also participated in raising funds through Delta Theta Tau—a local sorority of which she was a member—to fund low-income schools in the Kentucky Appalachian Mountains.

Near the end of her life, Edith spent her time working for the local World War II effort, volunteering at Muncie’s rationing board taking part in various functions including handing out ration books and distributing supplies and food.  She also spent time with her son, Robert D. Barnes, Jr., his wife, Louise Howard Barnes, and her three grandchildren.  She passed away on August 27, 1943, before she could see the war’s end.

To commemorate the legacy of Edith Elizabeth Kirby Barnes and her family, the Ball State University Libraries Archives and Special Collections has published the Edith Elizabeth Kirby collection to our Digital Media Repository.  The digital collection contains 150 photographs, deeds, correspondence, scrapbooks, and other items documenting the lives of Edith Kirby and her family from the 1870s to the 1940s.