Grace Goze is a junior Creative Writing student with minors in History and French. In Fall 2019, she studied abroad at Keele University in England through Ball State’s exchange program.

Many years before I embarked on a semester abroad in England, my room was somewhat of a shrine to the United Kingdom. I slept in a onesie patterned like the Union Jack with pillows patterned the same. I owned notebooks decorated in British calling cards and for a time, only listened to the Beatles. London has always been a fantastical place to me. Its age lends it to a rich history, and consequently, it has a myriad of different ways to experience this history.

Perhaps one of the most famous pairs of feet to walk the streets of London are those of William Shakespeare. A poet and a playwright, Shakespeare is literary icon whose influence is still felt today in the humanities. Given Shakespeare’s impact on literature and theater (two things I love), I found it unquestionable that I would see a show at Shakespeare’s Globe. And following my experience there, I recommend adding it to the travel itinerary of anyone who chooses to visit London. The Globe defines itself as “a world-renowned performing arts venue, cultural attraction, and education centre…celebrat[ing] Shakespeare’s transformative impact by conducting a radical theatrical experiment.” It is in essence a theater, but its architecture is what makes it an attraction of international interest. 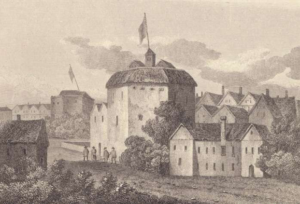 The Globe’s design is in part what makes it so famous. Incorporating history, the modern Globe theater was built based on the outdoor theaters utilized during Shakespeare’s time. This of course includes the very first Globe, which was built by the Lord Chamberlain’s Men, the acting company Shakespeare himself was a member. Funnily enough, the first Globe was built on leased land, and when the Lord Chamberlain’s Men found out their lease would not be renewed, they dismantled the theater overnight. They moved the materials to a new plot of land, one that Shakespeare and other company members pooled money together to purchase. The Globe theater, then and now, forms a circular shape. The nature of its circular seating “reflected not the D-shape of a Roman amphitheatre but the gatherings of crowds in a circle around the actors in town marketplaces, where all the players of 1576 got their training.” Further, although there is some covered seating, the yard in the middle is completely open to the sky. Consequently, in Shakespeare’s time, the cost to watch a show from the yard was only one penny. These particular theater-goers were referred to as ‘groundlings.’ 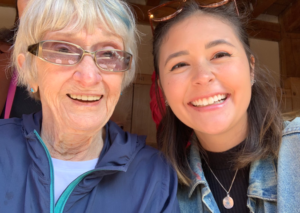 As authentic as it seemed to witness a show in the Globe as a groundling, I personally attended a show with my 88-year-old grandmother; standing throughout a two and a half hour performance was not a viable option. Luckily, the covered bleacher style seating isn’t unreasonably expensive, and they rent cushions for a small additional cost, which I’ll say are definitely worth it. Moreover, my grandma and I did pay for a guided tour of the theater prior to seeing a show. If you have a love for Shakespeare or even just a general interest in the performing arts, spend the money. The tour is informative as well as entertaining, and you get to see everything up close and personal.

Maybe you only have the money to do one, the tour or the show. As much as I enjoyed the guided tour, the show experience was one of a kind. The particular play that I saw at the Globe was Shakespeare’s As You Like It. My favorite aspect of the Globe was its interactive and inclusive nature, which were openly exhibited throughout the show. The cast of As You Like It included a few members who were hard of hearing. These players signed their lines, and fellow players signed while speaking when they shared the stage. I loved seeing that opportunities were given to actors of all abilities, and by not drawing attention to this difference in abilities, the theater works to normalize and fully allow any type of actor to step into the spotlight. Further, the audience is encouraged to participate in the theater. During Shakespeare’s time, the audience was far more engaged in the performance, cheering for heroes and booing the villains. The Globe’s modern cast encourages this level of participation and work to accomplish it by involving the audience, particularly the groundlings. 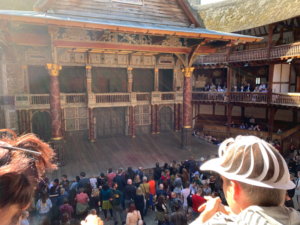 Fortunately, a trip to Shakespeare’s Globe puts you in proximity to other noteworthy places in London. To reach the Globe theater, you have a few options, but the most convenient will probably be the Underground. The theater is located in the Bankside area of the London borough of Southwark. By exiting at Blackfriars (District and Circle Lines), St. Paul’s (Central Line), or London Bridge (Northern and Jubilee Lines), you are instantly only a fifteen minute walk from the theater. You will also find yourself within walking distance of the Tate Modern, Britain’s national gallery of modern art. Admission is free for permanent exhibits, but donations are encouraged. Additionally, you are just across the River Thames from St. Paul’s Cathedral. The building is lovely, and there are services open to the public if you wish to attend one. 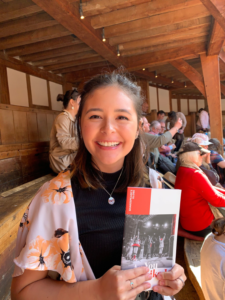 Seeing a performance at the Globe is one of the most authentic ways to experience both Shakespeare and theater itself. Due to its wealth and size, London was the first city in England to have permanent playhouses. Theater was wildly popular and members of all classes paid money to attend shows. Many of Shakespeare’s first shows were performed in the Globe, and although the original Globe burned to the ground in 1613, the current and third Globe theater is faithfully constructed after the original with a few adjustments to accommodate mandatory health and safety rules. The modern Globe’s location is even only a street away from the first Globe’s construction site. Overall, Shakespeare’s Globe is must-see upon a visit to London. I say this because the attraction is not only rich in history, but it also offers an entertainment experience unlike any other. The Globe takes the historic roots of Shakespeare’s plays and makes them accessible to a contemporary audience. So, whether you can quote Hamlet by heart or only pretended to read Romeo and Juliet in high school, a trip to Shakespeare’s Globe is for you!