Dr. Jackson Bartlett is an Assistant Teaching Professor for the Ball State Honors College. Dr. Bartlett’s research agenda examines issues of race, class, and gender; economic sociology; urban sociology; and black neighborhoods. His work can be found in Issues in Race and Society and he is currently working on a book manuscript on the place of the black middle class in Detroit’s urban renaissance. In addition to his teaching, Dr. Bartlett co-advises the Honors College Diversity Project, a group of student leaders charged in making the Honors College an inclusive and just place to learn.

Dr. Bartlett is a first-generation college student, raised in Coldwater, Michigan. He received his PhD in African American Studies from Northwestern University.

What did your parents do for living?

My dad worked on the line at an auto supplier called Simpsons, which is like a big factory and just traditional auto factory, loud, noisy. He became a foreman there at some point and just ended up working a lot and didn’t like it. He left there to go work for a firm that rebuilds and designs machines that go into auto supplier factories. No college education. But over the years, you know, he has kind of grown in his job and now they send him all over the world to install machines, basically. My mom was, for most of my childhood, was a medical records clerk and accounts payable clerk at a hospital. 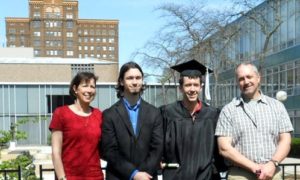 Jackson Bartlett and his family at graduation at Wayne State University in Detroit.

How did you decide where to go to college?

I barely did. That’s the first part. I didn’t know how to look. Nobody was telling me how to look. Nobody was going to college. My parents, obviously, had never gone to college. My mom used to live in the Upper Peninsula of Michigan, in Marquette, and loved it. We went on vacation there twice. And I decided that that’s where I wanted to live…Because I didn’t go on a lot of visits, like looking back, all the amazing things they tell you, I thought was just Northern Michigan University. It sounds like this is the best place in the entire world and I was really into it and had a really good time. I didn’t go to any other visits.

I applied to University of Michigan, had a terrible GPA, kind of knew I wasn’t going to get in. And that was it. I just applied to those two schools. I knew I was going to go in-state. That was part of it. The reason I didn’t apply to Michigan State and some schools that might have been more within my reach–Northern was really affordable, and in a really cool place.

I remember it being terrifying and like the most fun thing I’d ever done. I couldn’t wait to get out of my small town. Marquette, Michigan felt like a big city to me. So, it was really exciting. The dorms, that whole thing was just awesome. All the team-building and, and stuff like that. I was part of a council of youth that trained youth grant makers when I was in high school, and it reminded me of that. We would go to like leadership camps and stuff. So, to me, it just felt like leadership camp all over again and getting to know people, but then kind of realizing after a couple of days that like, not everybody’s been to this. 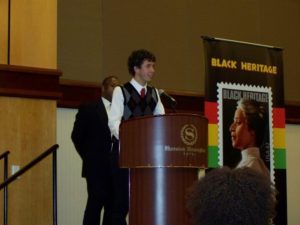 Jackson Bartlett in in Birmingham, AL in 2008, when he won the undergraduate essay contest at the Association for the Study of African American Life and History.

How do you remember that first semester?

I went wild, like, new friends, new things to do, the food everywhere…It was it was just a lot at once and I don’t think I was prepared for that. I was really shy in school, I was really bullied in school, and then I went up there and was just like, “I get to reinvent myself. I get to be the life of the party.” I didn’t study, I did pretty poorly. I remember as also, you know, an activist, I remember being a little combative and kind of a crappy student for a number of professors. It was a big learning experience for me. I don’t know if I’d call them regrets because I was so young, but that was my path. It wasn’t like a lot of you guys like, studying all weekend studying all night. I was there to have fun and start my life over.

Did you work during college? Where?

My parents were of the mentality that like, “If you don’t work for it, you’re not going to appreciate it,” so they never supported me. I always bought my own clothes, I paid for my own college applications, I paid for the ACT all by myself, and I worked all through high school. And so here I am, eight hours away, and for everyone else, everything paid for, so I felt like I was on my own. I had no money and I had to find a job immediately and I couldn’t find one in Marquette because it was like 12,000 students and 20,000 people, high unemployment, no mall. There was nowhere for me to go and work. My parents were pressuring me, “Why don’t you have a job?” I ran out of money.

I get hired at a nursing home…We were all nurses aides, like kind of home health type stuff, and we’re bringing in people who are dying. We’re bringing in people who need medication, I’m giving shots. So, I poured everything into that did very poorly in school. I was pulling double shifts working at night and third shift driving half an hour in the snow. I focused probably too much on working because I needed the money. I didn’t know how to balance that yet.

Did you ever change your major?

I asked myself this question a lot, because I don’t remember even having one. Frankly, I don’t remember thinking about it. I mean, I was just there taking classes. I had gen-eds, so I was like, “Oh I’ll just take my gen-eds.” I was in honors, so I had all my honors classes. It was kind of like our program; it was really nice, really tight, and they had their own classes. I took some Spanish. I was thinking about sociology, but I didn’t know what it was. I thought about English. I think I declared sociology and then changed it. I was there a year and a half and I dropped out because I ran out of money. I didn’t have money for tuition. I couldn’t get co-signers on loans.

Interested in reading more Ball State faculty’s #FirstGenBSU stories? Check them out on the Ball State English blog, and on our blog.