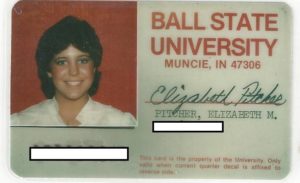 Elizabeth Dalton, Associate Professor of Honors Humanities, has been a Ball State faculty member since 1991. Her fiction, poetry, and creative nonfiction essays have appeared in a number of literary journals, including Clockhouse Review, Glassworks, and Adanna. She lives on a homestead near Mooreland, IN, with her husband, John, two dogs, two cats, and eight chickens.

I was the first person in my family to graduate from college.  I graduated from Blue River Valley High School in 1983 and matriculated at Ball State in autumn of that year. My decision to attend Ball State was based on two things: the Whitinger Scholarship, which I received, and Ball State’s nationally recognized journalism department.

As with most high school seniors, my family and I were inundated with college promotional material. My parents were hardworking—my father was an insurance agent and my mother worked part time for the USPS—but there was no question, financially, that I would have to attend a state institution in Indiana. The two schools on my short list were Indiana University, where I was considering a degree in music, and Ball State, with its fine journalism program.

Buried somewhere in the pile of marketing material that winter was an invitation to apply for the Whitinger Scholarship. I was pretty sure this had arrived at my house by mistake; I attended a small rural school and while I was co-valedictorian of the class, I had no reason to suppose that my education compared favorably with that of students graduating from bigger, wealthier school corporations. In the end, I applied and somehow the honors program again made a mistake: I was invited to interview with Dr. Warren Vander Hill, who was then the director of the Honors Program. My mother coerced me into going. I sulked and argued with her during the half-hour drive to Muncie, slammed the door to the car when I left her in the parking lot, and marched into the Whitinger Business Building (where the Honors Program was housed at the time), just certain the entire experience was a waste of time. Then, I met Dr. Vander Hill, who was warm, funny, and very interested in my thoughts on Mark Twain’s fiction.  By the time I left his office, I knew one thing: I wanted to have more conversations just like that one.

Those conversations came my way much sooner than I expected. The highlight of my freshman year, and indeed my entire undergraduate experience, was the humanities sequence. My professor was the brilliant Dr. Richard Wires, who was incredibly intimidating but also wry. I have always been a dedicated reader, but this class was a challenge. Often, we read a play or a book a week, and then we were expected to talk about it with our classmates. This was terrifying and exhilarating.

In addition, I was certain I was the most clueless person in the class that fall. Many of my classmates were better read than I was, and they spoke knowledgeably about the Middle Ages, music, government, and law. I didn’t know much beyond the fact that I wanted to be a writer. I spent the first week or so in a self-imposed cone of silence, listening to my peers in class and growing more and more certain that I was out of my league. Finally, and I don’t know when this happened exactly, I came to understand one important thing:  if, indeed, I was the least prepared student in that humanities class, then I had the most to gain from it. From that point forward, I knew I would be fine. I still remember some of the papers I wrote for Dr. Wires, I remember many of the conversations, and I still remember the rollicking joy of reading Moliere for the first time.

While I was the first of my family to graduate from college, my younger brother, Jason, now has a degree from Purdue and works as an engineer in Georgia. We have, more than once, debated the merits of a Purdue education vs. a Ball State education, but here’s how I see it: I have never once needed him to solve an engineering problem for me, though he needed to chat with me about the finer points of the Odyssey when he re-read it a few years ago.  😊