Life in the Honors College is all about discovering ourselves and the world. Our Honors Life feature highlights just that: how students are finding purpose and making things happen. Here, Honors student Leah Heim describes how she strives to live authentically by connecting her spirituality and her studies.

The opinions and views expressed here are those of the author and do not reflect the opinion of the Ball State Honors College or the editors of this blog.

I’ve never considered myself a rebel. I’ll scream along to power metal in my car like I’m trying to resurrect an army of the undead, but I’ll turn around and endure a week’s worth of my roommate’s dirty dishes to avoid confrontation. My aesthetic (which includes a long, black trench coat) has been carefully constructed to walk the line between approachable and frightening enough to deter creepers.

One morning during my senior year of high school, my mother and I got into a fight, and I stomped out the door with a book of matches so I could smoke cigarettes after class to get back at her; my anger fizzled out in about half an hour, and that book of matches sat unused in my car for three years until I eventually gave them away.

So, no, I am not a rebel. Not a typical one, at least. However, I nonetheless have willingly chained myself to a liberal arts education—specifically, a degree in literature—that by its sheer impracticality makes a statement in the dog-eat-dog job market that slavers after college graduates each May. And, though I don’t think I ever made a deliberate connection between the two, in retrospect I cannot help but recognize how my decision to study literature has been influenced by my belief in Quakerism—a faith that radically advocates for the dignity of the human soul.

“Quakerism plays an important part in my philosophy of literature”

Now, have no fear: I’m not about to turn this blog into a sermon (I need at least four beers before I start moving in that direction). However, the specific theology of Quakerism plays an important part in my philosophy of literature, and that theology goes much deeper than a brand of oatmeal.

At its root, Quakerism believes that all people have a direct access to the divine (also known as the Light, or that of God). As a Christian Quaker, I interpret this divinity to be Jesus Christ, but there are Quakers of all different faiths—Muslim, pagan, atheist, etc.—and each Quaker is encouraged to interpret that inner connection to divinity as best fits their sense of integrity. In trying to apply this core belief to all aspects of their lives, Quakers have developed some characteristic practices. While it’s not as common as it once was, certain Quakers will not take oaths in court because they believe that to do so would weaken their testimony of the Light by implying that they were not telling the truth outside of their oath. For many Quakers, this testimony of the inner Light leads them to be pacifists, for how could the world ever be improved by the deliberate death of someone who possesses a personal knowledge of God? 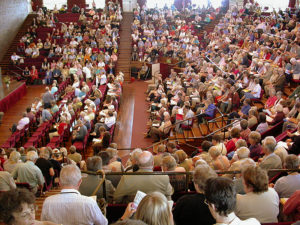 Photo of a Quaker meeting in York

However, this belief in the inner Light finds its most obvious reflection in the shared Quaker devotion to introspection, as it is our conviction that God is found within, not without; because of this, the most traditional Quaker services (called meetings) are silent gatherings where Quakers come to meditate, only occasionally breaking the hush when they feel led to speak their thoughts aloud for the benefit of the meeting. Such a style of worship may not seem so dynamic or practical, but it is startlingly powerful; the term “Quaker” was, in fact, originally a pejorative term that described the trembling enthusiasm of the faith’s first adherents.

Because of my particular theological background, I am convinced that moments of introspection and meditation are essential to the radical growth and flourishing of the human being, and as a literature student, I believe that a very practical way of facilitating these moments emerges within English classrooms. As a Quaker, I’m not alone in this: the Quakerism journal that I subscribe to has an annual edition that allows for individuals to submit articles about books that have impacted them.

And it makes sense, doesn’t it? How better to understand ourselves (and, according to Quakers, that of God within ourselves) than by entering the safe space of a novel or poem, where a reader has the freedom to be anyone and do anything they choose? And how better to do honor to others (and, according to Quakers, to that of God within others) than by studying the world’s emotional record, than by chasing the ever-receding horizon of human experience that a piece of literature can—if only for a moment— pin down and bear witness to?

As such, I see literature and other liberal arts as tools to aid in the ever-important introspection of the human being, an introspection that allows for a powerful blossoming of the identity and of the soul. What makes this viewpoint something of a rebellion has less to do with my actual opinion and more to do with the environment in which I find myself expressing my opinion. In many respects, I live in a world that actively works against this vision of the blossoming of the human soul.

“In our current structure, the most honor a person can often manage to do to themselves and others is a restless night of sleep”

Education in America is based upon employment; so why study something you’ll never get a job in, even if it is good for your understanding of your humanity? Isn’t it easier to just take those dry and stagnant lecture classes? Employment in America is informed by financial frameworks designed to push human performance to its most unhealthy limits; so why take time to do honor to yourself and others with a moment of literary meditation, when you’re so exhausted from a day’s work? Isn’t it easier to just scroll through a bit of numbing social media? In our current structure, the most honor a person can often manage to do to themselves and others is a restless night of sleep, so that they should not, in a slump of illness, fail to function well enough in the work that stands between their loved ones and starvation.

As a Quaker, it breaks my heart to see this dually stunted humanity and spirituality; I try to fight these forces within myself, and I still too often succumb to them. However, the danger is far more pragmatic than concerns about the human soul. When we do not attend to our humanness or to the humanness of others, it is far too easy for biases, prejudices, and hatreds to get claws into us; or, if we manage to attend to this humanness enough to think of ourselves as good and fair people, it is still far too easy for us to become implicit with that gentlest of killers—complacency. There won’t be much left of the world between hatred and complacency if we don’t fight for an honest and serious deliberation of our own, shared human experiences, deliberation that will lead us to places of serenity, understanding, empathy, and forgiveness from which we can make decisions to implement lasting improvements in our world.