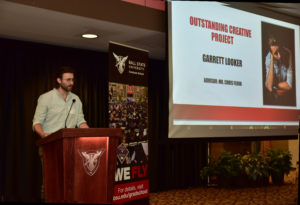 Our 2021-2022 Outstanding Creative Project Award winner is Garrett Looker.  Garrett earned a MA in Telecommunications  in July of 2021.  Garrett’s advisor, Mr. Chris Flook said, “I nominated Mr. Looker because his project exemplifies the best work our graduate students do in our program. His work, a documentary about local redlining practices in Muncie, blends storytelling and history in a way to best communicate this really awful part about our history. Mr. Looker is also a talented individual; he can write, act, direct, shoot video, and edit well. It’s rare to have someone as talented as Mr. Looker and even more unique in that he dedicated his skills to create the project, in hopes of improving our community’s understanding of racial injustice.”

Here is a Q&A with Garrett

What made you select your research topic?

My research topic came from an interview I conducted in the spring of 2018 while working on a separate documentary regarding the state of public education in Muncie. During that interview, I was informed that several neighborhoods throughout the city still had historical covenants that were once used to segregate the community. After investigating the claim and connecting the covenants to current day struggles of equality and equity, I knew that the story was far too important not to tell. However, given the size of my team at the time, and the deadlines we faced, giving the story its due justice wasn’t possible. But I knew that I simply had to find a way to uncover the story. After I graduated in the spring of 2019, I returned to Ball State to further my education of telecommunications and, specifically, documentary filmmaking. I knew that by going back, I would find many new experiences and get hands-on learning in the field. But I also knew that I would be able to chase the story of Muncie’s dark history of covenants. I decided to devote my entire final year of graduate school to uncovering the historical effects those covenants have created and the divisions that remain.

Please tell us about your research?

Once my subject was decided, I then chose specifically what question to pose that best represented my educational pursuits. I pulled from the lessons I learned during my four years of undergrad at Ball State studying journalism. The concepts of integrity, truth, and objectivity are all very important to me, as they have formed the groundwork of my journalism and documentary filmmaking careers. The perception of these concepts are routinely questioned, and I wanted my research to add to the conversation. Specifically, I wanted to study how the use of narration in a journalistic documentary can alter the perceived truth and objectivity of the story. To question this, I created three cuts of the same documentary; one with standard narration, one without narration and the story was told completely through sources, and one where the narrator could be seen asking questions and narrating the film.

What brought you to Ball State University?

Garrett’s documentary “The Covenants of the Land: Middletown’s Divide” can be viewed at: https://www.youtube.com/watch?v=wS_NgjDtn2o. 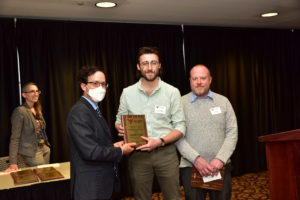