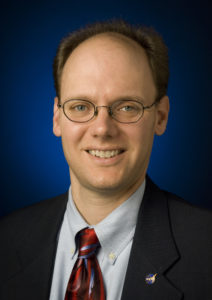 Mike Green did not fully anticipate the phenomenal opportunities that would unfold after his undergraduate studies at Ball State. Now, after over 30 years working at NASA Headquarters in Washington D.C., he reflects on his Ball State education, which he says prepared him for experiences beyond his imagination.

Green has served on the Dean’s Executive Advisory Committee for the past few years after contacting Dean McCarthy and expressing his vision for future CSH efforts.  His passion lies in helping students realize the outstanding potential for opportunities beyond college and Indiana.

The beginning of something amazing 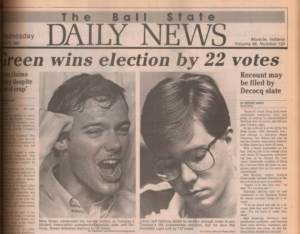 Hailing from Columbus, Indiana, Green began as a Ball State freshman in 1984, double-majoring in Telecommunications and Political Science. Though he thrived in communications, he quickly realized that his heart belonged to political science.

“The Political Science Department opened my mind up to a more diverse set of views and opinions,” said Green. “Ball State sent me down a path that made me a much more intellectually curious and pragmatic individual, learning that things aren’t black and white.”

With a passion for politics, Green got involved in Student Government Association, called Student Association at the time. After serving as Vice President, Green was elected as Ball State’s student body president, in the spring of 1987, a role which would propel him into a lifetime of leadership.

As graduation approached a year later, he planned to make a bold jump: moving to Washington D.C. alone to attend graduate school. At American University, he began earning his Master’s degree in political science. Soon after, Green was accepted into the Presidential Management Fellowship Program: his gateway to the National Aeronautics and Space Administration, famously known as NASA.

“When I think about myself in college, I could have never envisioned that my life and my career would take me where I am right now,” said Green. “Ball State really prepared me not just with the classes I took, but with the extracurricular things I did; prepared me to take that next step and come out to D.C. on my own.” 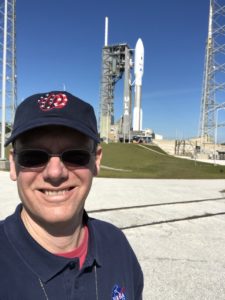 Now, after 30 years with the organization, he reflects back on the wide variety of roles he’s held, including those dealing with aeronautics, space, strategic planning, and legislative matters. He describes his experiences as “tremendous,” noting his involvement with various space missions, famous astronauts like Neil Armstrong, and anniversary events such as NASA’s commemoration of the Apollo Eleven moon landing.

“It’s been quite a ride over the years,” said Green. “For the last 10 years, I’ve been working in the space technology mission directorate as a Deputy Associate Administrator. I’m in charge of the external relations: things that we do within the mission directorate and the business and operations side. We do as much as we can to enable those developing the space technology and make sure they have the money and resources to develop those systems.”

None of these experiences had been on his radar as a young Ball State graduate.

When he thinks back to his time as a college student, Green remembers underestimating the scope of his professional opportunities beyond Ball State and Indiana. Now, he’s on a mission to help current students look further and think bigger.

In the noisy age of digital communication, Green believes that the College must implement strategic storytelling to stand out in the crowd. From experience, he knows that opportunities are hidden everywhere for CSH graduates, and the key to helping students discover their potential is by introducing them to real-life examples. While he recognizes the value in sharing impressive statistics, his professional experience at NASA has revealed that personal stories hit closer to home. Most importantly, hearing about alumni successes can show students the multitude of possibilities.

“We must individualize the stories and talk about the value we bring to students. I think students seeing examples of successes, of things that they could do, is very important,” said Green.

When he was an undergrad, he never had the opportunity to talk to a BSU alumnus turned Washington D.C. professional. He hopes things are different for current students, and strives to be part of the solution. “I would like to give that perspective. Ball State students and graduates can go and make real impacts in the government at all levels of the nation. And I’d like to think that I’ve had a positive impact in 30 years at NASA in moving the agency forward with its mission. It all started with four years at Ball State,” he said.

Green is particularly passionate about working to improve The Bowen Center for Public Affairs during his time on DEAC. “I really want to give my time and effort so folks can realize that you can do a lot with a Ball State degree, and you can do things in a lot of different areas. It doesn’t have to be in the State of Indiana,” he said.

“As the demands for people with not just humanities degrees but soft and hard sciences increase, the opportunities are going to increase tremendously,” said Green. “The university has done a great job of expanding the College so far, and I’d like to do whatever I can to inspire students and the College leadership to look beyond.” By leaning into Mike Green’s innovative insight, the Advisory Committee and the College of Sciences and Humanities are rising to modern challenges, creating vision through strategic storytelling, and helping propel students to a lifetime of success.