Muncie, IN —October 20th, 2022. The College of Communication, Information, and Media’s Hall of Beneficence is honored to award and recognize those individuals who enact the mission of CCIM and display the endearing values of Beneficence; Excellence, Innovation, Courage, Integrity, Inclusiveness, Social Responsibility, and Gratitude. We are pleased to announce the 2022 class in the Hall of Beneficence. 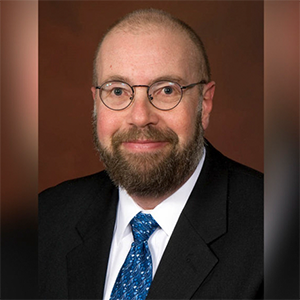 The Steward Award is given to an individual or organization whose meaningful partnership has made a significant impact on the College of Communication, Information, and Media’s commitment to create challenging experiences that prepare students for careers as ethical practitioners and scholars.

After graduating from Ball State with a journalism degree in 1973, Mike was a successful journalist and editor for 23 years. In 1982 he was part of a team at the Fort Wayne News-Sentinel that won the Pulitzer Prize for local reporting. He later moved to a 20-year career in teaching and administration at Northwestern University’s Kellogg School of Management and Medill School of Journalism, retiring in 2011 as executive director of the Media Management Center. Mike is the author or editor of several monographs, including “Values, Culture, Content,” “The Newsroom Brain,” and “The Changing Reader.” He invests in the future by investing in our students, supporting them with scholarship and informal mentorship, often coaching young writers at the Daily News to become better journalists. 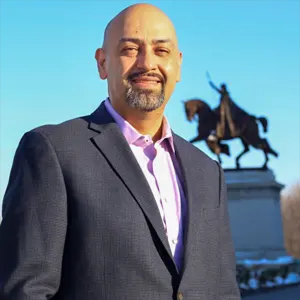 The Alumni Achievement Award is given to individuals who graduated from units associated with CCIM at least 5 years prior and have used their education to advance their area of professional or creative endeavor.

Jerry Walker was the first in his family to attend college, and his education at Ball State provided him with valuable opportunities. His career is impressive, previously serving as a business partner, infrastructure architect, and cyber-security advocate—helping transform 11 companies from technology-averse to digital champions using automation and business intelligence to optimize operations and efficiency, fiscal management, and growth. Currently, Jerry serves as the CIO/Director of IT for the Oregon State Treasury. Jerry has continually demonstrated courage and inclusive excellence. In every position held he created pipeline programs for underrepresented students and populations, increasing each organization’s diversity and the individual’s confidence that they belong. He is an active member of the Dean’s and CICS’ Executive Advisory Committee providing both knowledge and financial support.

The Distinguished Alumni Award is given to individuals who graduated from units associated with CCIM at least 15 years prior, have distinguished themselves, and demonstrated outstanding success in their professional or creative endeavors. These are individuals who have defined the future of the field of communication, media, or information.

Dr. Marilyn Weaver has dedicated her life to Ball State and personifies the Distinguished Alumni Achievement Award, serving as department chair from 1996 until her retirement in 2010. Marilyn led the department through three successful reaccreditation reviews. She was single-handedly responsible for ensuring the department was well-resourced as it transitioned into its new home in the Art & Journalism building in 2001, spending countless hours poring over blueprints with architects and arguing for department facilities that would become the envy of nearly all journalism schools nationwide. During her time as chair, she worked tirelessly to cultivate alumni connections and bring them back to share their expertise and wisdom with CCIM students. To this day, even in retirement, she carves out time while on vacation to connect with alumni. Her passion, dedication, and loyalty to the School of Journalism and Strategic Communication and the College of Communication, Information, and Media are rare indeed. 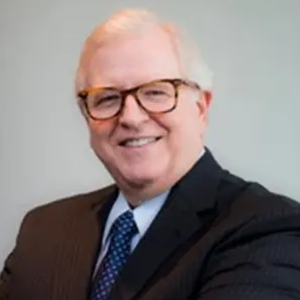 The Inclusive Excellence Award is given to an individual or organization in the field of communication, media, or information who has distinguished themselves in advancing inclusive excellence.

Gene Policinski has used his knowledge of journalism and the first amendment to promote inclusive excellence in our news and lives.  He started as a reporter in 1969 at the Greenfield Daily Reporter. He worked as a reporter in Marion, Indiana, and as Gannett statehouse bureau chief in Indianapolis before moving to the Gannett News Service bureau in Washington, D.C., in 1979 to cover Congress and national politics. In late 1981, he moved to the advanced group of editors preparing to launch USA TODAY, holding a number of news executive roles leading him to managing editor of sports. He then moved to the Freedom Forum, a non-profit foundation that would later build and operate the Newseum Amendment law and issues since 1996, in a variety of executive roles. Mr. Policinski has held his current position since 2013, when the Institute was founded as the programs arm of the Newseum and Freedom Forum. Along the way, he has worked in television, radio, and online news operations, and hosted and produced news and interview programs in all of those mediums. He currently hosts podcasts and writes a nationally distributed column, “First Five,” at the Freedom Forum. From 1999 to 2014, Gene was a narrator/emcee of a touring production, “Freedom Sings,” a multimedia, music-based stage play about freedom of expression in music. 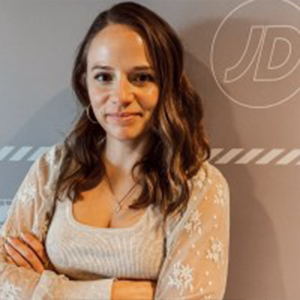 The Excellence in Innovation and Courage Award is given to an individual or organization in the field of communication, media, or information who demonstrated courageous innovation.

Sara Hauck is known by the faculty for her courage and her willingness to live her convictions. In the spring of 2014, Sara was graduating from Communication Studies. She occupied the enviable position of having landed two jobs. One was her dream job–an internship from the Youth Foundation at The Finish Line. Although there was no job guarantee at the end, Sara’s passions aligned clearly with the position. Sara chose the internship, noting, “it came down to having the guts to follow my passion because life is too short not to. You have to figure out what makes you happy and go after it.” Additionally, as Sara continued her work at Finish Line’s Youth Foundation, she used her formidable public speaking talent to build a very successful “side hustle” as a motivational speaker. She shared her message of “passion over paycheck” with dozens of audiences (including businesses across Indiana, TEDX, and even an address at the CCIM Dean’s List Ceremony in 2018). During these experiences, she discovered one commonality that tied people together: Facing fear. Sara’s message expanded to include encouragement for individuals to “face their fear in pursuit of an unapologetically authentic life.” In addition to expanding her speaking engagements, Sara launched “Facing Fear with Sara” across numerous social media platforms and produced a successful podcast (which now boasts 100 episodes). We stand in admiration of Sara’s ability to address difficult topics such as body image, self-esteem, and assertiveness with complete candor and courage. Sara’s courage has recently been put to the test as she has faced one of the most frightening situations in life: a cancer diagnosis. Throughout her two-year journey back to health, Sara has used her “facing fear” platforms to document with startling honesty all of the highs and lows she herself has experienced, to interview cancer survivors, and to feature stories of healthcare workers who have helped her. In doing so, Sara has brought education, as well as messages of hope and healing, to hundreds of people whose lives have been touched by cancer. As these three stories demonstrate, Sara sets the gold standard for excellence in innovation, as well as one of CCIM’s enduring values—Courage.

The College of Communication, Information, and Media (CCIM) at Ball State University creates challenging educational experiences that prepare students for careers as ethical practitioners and scholars. Our college redefines the intersection of communication and technology while emphasizing the importance of human interaction. CCIM alumni are leaders and entrepreneurs who go into a breadth of fields. They know how to adapt quickly to a diverse and ever-changing global job market to ensure fulfilling careers and meaningful lives.