On April 11th, John Quiñones visited our very own Ball State University. He hosted two workshops, sat down with Westview Elementary students, and visited President Mearn’s house, all leading up to his Distinguished Letterman Lecture that evening. John Quiñones shared some valuable lessons with us during his time here that we’d like to share with you, right here, in this blog.

John Quiñones is originally from the Barrio, a place in San Antonio, Texas, which he holds close to his heart. As a child, he knew he was meant to pursue journalism. Several of his teachers discouraged his plans to go to college until John met his English teacher. English was not his first language. However, he worked hard and ended up excelling in his class. The teacher suggested he talk to the school newspaper, kicking off the start of his successful career.

After graduating high school, Mr. Quiñones went on to attend St. Mary’s college where he got his bachelor’s in speech communication. After graduating, he tried to get hired as a reporter for various news stations. No one hired him; a Latino correspondent reporter was unheard of at the time and so he took a job with the country music station. He was not happy there. He considered law school, anything to get him into an industry where his passions flourished.

One day, he listened to a speaker who worked for NBC. He met with him after his speech, interviewed him, and with that on his resume, he was able to have his master’s degree paid for by NBC. Within a couple years, he graduated from Columbia University with a degree in journalism.

John Quiñones received his first big-time job reporting for CBS Chicago. He started out as a reporter and eventually worked his way up into long-form journalism. He was then hired onto ABC Miami as a General Assignment Correspondent. This new position allowed him to shine a light on untold stories.

One of his most impactful broadcasts happened in Columbia. At the time, abandoned children were living in the sewers, stealing from local stores as they had no food, no money, and no home. When Quiñones heard about this, he immediately went to the scene in Columbia with his cameraman. They spent two weeks documenting the lives of these children. Upon their return to America, the documentary was aired, and thousands of dollars were raised to take the children out of the sewers and into safe homes.

Quiñones went on to do various reporting jobs across the world for the next few decades. However, he’s most well-known for his show “What Would You Do” (WWYD). In this series, he stages a variety of ethical dilemmas with real-life Americans, not actors. He and his camera crew hide as the scene unveils itself, waiting to see what the one might do in such situations. WWYD started as just a segment at the end of 20/20. Eventually, the segment extended and became its own show. It remains popular to this day.

During his recent visit to Ball State University, Quiñones spoke to kids at West View Elementary, led two student workshops, and then hosted the David Letterman Distinguished Lecture. He answered numerous questions throughout the day, including his experiences as a Mexican-American. He would state, “Wear your background as a badge of honor”. It became clear that the struggles of being a Latino journalist inspired him to keep pushing for greatness.”

Izek, a first-year media student who attended one of the workshops shared, “Even as a media student, I was still very inspired by his words. Once he started talking about his struggles as a Mexican-American journalist and how he overcame that hurdle, I felt motivated to make my mark like he did.

His lecture in Pruis hall continued to motivate our students, faculty, and staff. Over 500 people were in attendance filling nearly every seat in the room. Here, he once again shared his heartfelt story of overcoming obstacles to achieve his dreams. Several students were so moved by his lecture, that they decided to share their own stories of hardship during the Q&A. It truly was a beautiful moment. 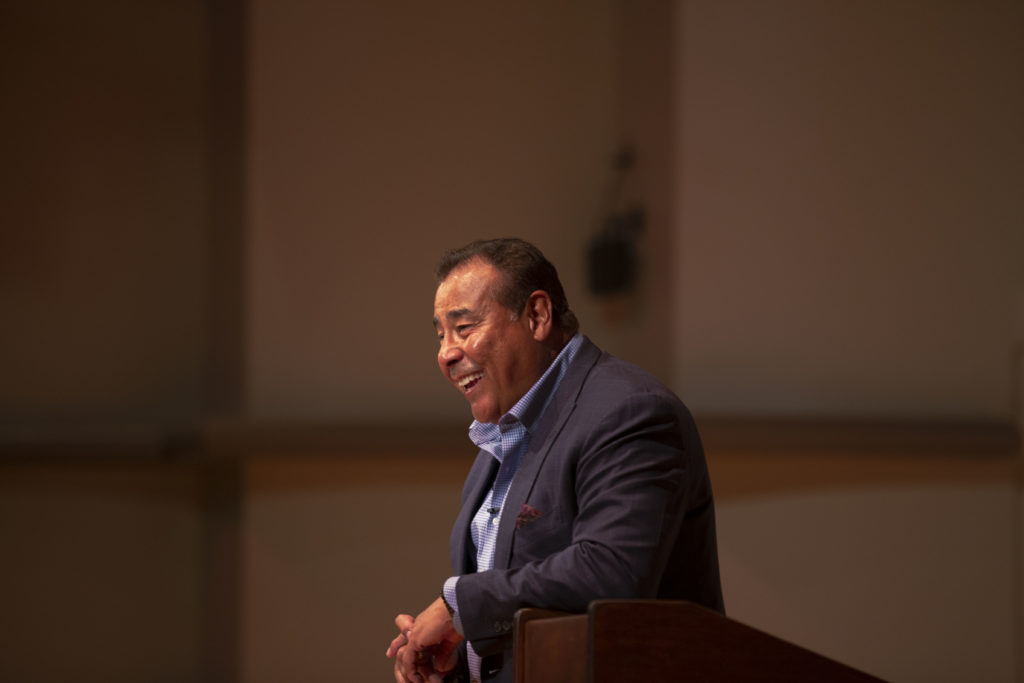