The 100th Anniversary Open House will be from 5-6:30 pm, Thursday, March 31, in the Unified Media Lab. Our students will be here to chat with our guests about the 100th Anniversary Special Edition that they are busy creating, and that paper will include interviews with alumni across the decades who are sharing great memories of their time at Ball State and with the DN. Additionally, we’ll unveil and celebrate the proclamation we’ve received from the State of Indiana House of Representatives noting the centennial and the ongoing work our student journalists continue to do ethically and responsibly.

The 100th Anniversary Dinner will be Thursday, October 2o, in Cardinal Hall. Tickets are required and can be purchased here. 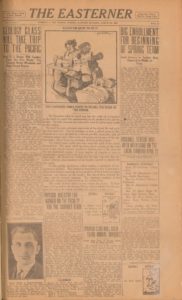 First Issue of The Easterner

For almost 100 years our very own Ball State Daily News has been keeping students up to date. On March 30th, 1922 the first issue of the Easterner was released. They went by the motto “live paper from a live school.”  The Easterner covered things like school and, community activities much like today.

Taylor Smith, Editor-in-Chief said “For the past century, Ball State’s student journalists have prioritized ethical and responsible storytelling through a newspaper that has gone through many changes but has remained consistent in its purpose. The Ball State Daily News has informed students and the Muncie community for 100 years, telling stories while simultaneously recording history. This year, The Daily News gets to celebrate its history of 100 years of informing, educating, and connecting our community. It is such an honor and a privilege to be recognized by the State of Indiana’s General Assembly for 100 years of “honest and responsible journalism,” and we look forward to and hope for many more. Thank you for your continuous support of student journalism.”

Over the years there’s never been a story too big for this news outlet. They’ve covered great victories, like the end of World War II, and horrible tragedies, such as 9/11. There’s no story too big or too small, and that’s something to be proud of.

Lisa Renze, Unified Media Lab, and Student Publications Adviser said “Celebrating 100 years as a student newspaper is a watershed moment for the Daily News — it’s a rare achievement. Few student publications have an opportunity like this. We’re so grateful for the ongoing support from the university and from our readers. We stand on the shoulders of those who have gone before us providing ethical and empathetic journalism to the Ball State and Muncie communities. It’s a privilege to continue that work, and now more than ever, it’s a reminder of the vital role a free, responsible press plays in our democracy.”

How Can You Make an Impact?

Did you feel moved by the story of The Ball State Daily News? You too can be a part of this history by purchasing a congratulatory ad and recognizing the paper’s generational commitment to responsible, ethical journalism. Your congratulatory ad will be designed and customized by McKinley Avenue Agency’s design team. You can even design and upload your own! 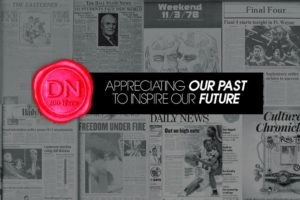 The 100th Anniversary Edition of The Ball State Daily News will be available to pick up on Thursday, March 31, on newsstands across the Ball State’s campus, around Muncie, and online.