Meet Chris Flook, an Associate Lecturer in the Department of Telecommunications whose outstanding video and motion graphics work routinely wins awards year after year. A true history buff, he teaches students how to use modern storytelling techniques to depict historical events and also lends his talents to numerous local organizations outside of  the university. In this faculty spotlight, Flook shares his perspectives as an educator and filmmaker, and some of his favorite work.

Could you share the personal journey that led you to become a faculty member?

When I was sitting for my thesis defense in Digital Storytelling at Ball State, my committee members, Dr. Joe Misiewicz, Dr. James Chesebro, and Dr. Beth Messner, asked me if I ever wanted to teach and encouraged me to do so. I told them no. But over the course of the next year, Dr. Joe convinced me to consider at least a year of teaching to see if I liked it. So when a position became available in summer of 2008 in TCOM, I applied and was eventually hired! I’ve been teaching here ever since. I’ve always deeply appreciated the three of them, as they clearly saw something in me that I didn’t see in myself. Good mentors do that and I’ve tried hard over the years to replicate the amazing experience for my students that Misiewicz, Chesebro, and Messner gave to me.

I believe in and try to develop all of my courses under a philosophy of bottom-up tinkering in an experiential setting. So much of what we do in TCOM, especially in the courses I teach, involves a curriculum that blends technology, aesthetics, and storytelling. It’s a lot to cover, but I try to provide a solid foundation in knowledge but then emphasize practice, trial and error, and experimentation in my students’ approach to work. As long as they are following best practices, doing their work legally and ethically, and staying safe, I generally give my students a wide latitude in what they do. I believe the paramount goal of good education is to create the conditions for students to develop wisdom, which is best attained through personal discovery and trial and error, not top-down mandates from their professor. It’s not that instruction in established knowledge is irrelevant, but my goal is to have the students leave my classes and immersive projects with a strong ability to make wise creative, aesthetic, and technical judgements in real world conditions.

You teach video production and motion graphics. Do you use your skills outside of Ball State?

All the time. I continue to work freelance and also produce my own creative work. I’m a freelance writer for the Indiana Destination Development Corporation, where I take photos and write blogs about local travel. I’m also working with the Indiana Association for Floodplain and Stormwater Management to produce a training series on water quality, construction runoff, and stormwater management. I also volunteer locally at the Delaware County Historical Society.

This past year, because of the pandemic, we’ve had to switch to all online programming, so I made a series of short educational documentaries about local history, including Decision 1865 which recently won a Best of Competition Award from the Broadcasters Education Association (BEA). Finally, I also produce creative shorts, just for the fun of it!

Decision 1865 from Chris Flook on Vimeo. The video won the BEA “Best of Competition 2021” Award.

Easter from Chris Flook on Vimeo.

Saboteur from Chris Flook on Vimeo.

Could you give us the top three projects you have worked on?

My three favorite BSU/TCOM projects are the Lenape on the Wapahani River documentary, the Indiana Bicentennial Torch Relay project, and the ongoing Cardinal Cinema series with Ball State PBS. In all three projects, the students and I produce(d) work in real-world settings where collaboration, experimentation, and engagement are central to the project.

– Lenape on the Wapahani River: in 2013, I led an immersive learning project with some of TCOM’s best students to produce a documentary about the Lenape (Delaware) Native Americans that once lived along the White River here in Delaware County. We partnered with the Delaware Tribe of Indians to produce the documentary. I was the project’s advisor, producer, and assistant editor. I loved the project because of the great team of students that I was able to work with, but also because we made something that we hoped would improve the public’s understanding about Indigenous life in east-central Indiana before colonization.

Lenape on the Wapahani River from Ball State TCOM on Vimeo.

– The Indiana Bicentennial Torch Relay: Indiana celebrated its bicentennial anniversary in 2016. To celebrate, the state’s tourism office coordinated a massive torch relay through all 92 Indiana counties over six short weeks. We produced photos of each torch bearer, a daily highlight video, and a project documentary (below). I bonded well with a team of amazing, hard working, and very funny students and produced a once-in-a-lifetime account of Indiana’s birthday. I was the project’s advisor, van driver, producer, occasional photographer, and editor.

– Cardinal Cinema: Beginning in 2017, I began advising an ongoing immersive project in partnership with Ball State PBS called Cardinal Cinema. In it, students pitch original ideas for short films and documentaries. The best projects are ‘greenlit’ and receive funding from Ball State PBS to produce their work. I love this project because, unlike most of my other immersives, the ideas for the films are entirely developed by the students. Here’s a list of finished films:

You received numerous awards for your work. What recognitions were the most meaningful to you? 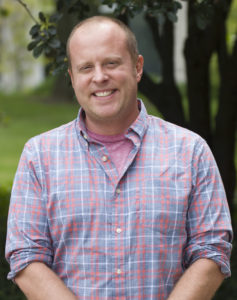 Of all the awards I’ve won, two are the most meaningful to me: the Benny award from Ball State’s Alumni Association and the Arts Leader award from the Muncie Arts and Culture Council. I received a Benny in recognition of my work advising the From Normal to Extraordinary: Ball State’s First Century immersive project, where the students and I made a documentary for BSU’s centennial anniversary. The Arts Leader award from MACC was in recognition of my work spearheading the effort to build the statue of local civil rights leader, Hurley C. Goodall. It’s always an honor to win any award, but being recognized by my alma mater and my hometown means a tremendous amount to me. I won both awards in 2019 and it made me feel like I finally “made it” professionally.

My proudest moment was when we screened the Lenape on the Wapahani River documentary with elders of the Delaware Tribe of Indians in Bartlesville, Oklahoma in 2014. We worked closely with the tribe to tell the story of their time in Indiana, which in Delaware history, was a relatively brief period (1796-1821) for the Delaware people, but fundamental in the origins of Muncie. The film was well received and I felt like the students and I made something that had real meaning and impact. For me, it was a transformative experience and the one I’m most proud of professionally.

Can you share one thing that people don’t typically know about you?

I’m big into gardening….like, it pretty much consumes all my freetime nine months out of the year. I bought my first house a few years ago and have, more or less, converted the entire yard into a flower and vegetable garden. As much as I love cinematography, photography, motion graphics, and editing – it’s nice to have a hobby that doesn’t rely on technology, just dirt, soil, sun, water, and plants. It’s quite literally very grounding, plus it forces me to work with nature, as opposed to trying to fight it all the time. During the season, especially in spring and late summer, I spend hours outside digging, transplanting, weeding, picking off pests, and harvesting. It’s the best way to lose yourself.

Is there anything else you would like to add?

Ball State’s TCOM department is an amazing place to work. There’s so much emphasis on the student experience and the faculty are given resources and liberty to try new things to better educate our students. I have colleagues that teach around the United States and they don’t have any of the same opportunities that we have at Ball State. No one has ever told me no at BSU. Plenty of people have told me my ideas, on occasion, suck, but in the end, I have a lot of freedom to try new programs for our students. I’ve failed many times, but the culture at the university, in CCIM, and TCOM allows for creativity and out-of-the-box thinking. It’s refreshing and I wouldn’t want to be anywhere else!