Becca Kizer is a ‘17 and ‘18 Ball State CCIM alumna. Influential professors and projects from her studies in the Journalism and CICS programs led her to her current professional career with Accenture. We sat down with Becca to reflect upon her experience at Ball State and what happened after CCIM.

What kind of student were you while at Ball State?

I was someone who really truly wanted to succeed. I needed to be perfect. At a certain point, I realized I didn’t want to be a journalist. I needed to finish my degree and figure out what was next, but I didn’t know what was next. I was kind of a dreamer in that way, I was along for the ride. I wanted to be a writer. One of my goals in life is to write a book. I chose journalism because I knew I wanted to write, but over time I realized you can be a good writer without being a journalist. 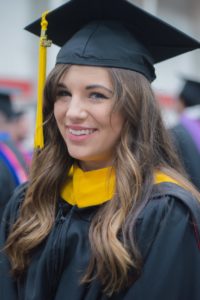 What was your favorite place on campus?

Definitely the art museum. It’s where I did my graduate assistantship during grad school. I would just go in there and sit, it’s beautiful. I am from Muncie so even as a child I loved it there. It was really cool to be able to go back and work there. We had a traveling exhibit based on LeRoy Neiman and I loved it so much, I have four of his prints in my apartment right now.

What is your best memory at Ball State?

In general, it was the time outside of class with my friends. Close friends kept me motivated because it was kind of easy, especially in grad school, to lose motivation. Time with friends definitely helped that. In grad school we went on amazing trips and excursions. We went on a ski trip and I had never been to Colorado before, so that was really cool.

Was there a professor that had a big impact on you? 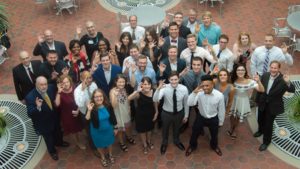 Post-graduation photo with CICS professors and graduating class in July 2018.

John Strauss was one of my journalism professors. He had a huge impact on me and was actually the first professor to me about CICS, my grad program. He sat down with me outside of class one day and told me it would be a great fit. With his recommendation, I did it. I wouldn’t be here if I hadn’t spoken with him about that.

If you could meet your freshman self what would you say?

During undergrad, I would tell myself to get more involved sooner rather than later with making friends and clubs. I was the type of student that was very introverted. I wanted to be a part of things and wasn’t sure how. I would have wanted to push myself more to do just that. Early in grad school, I was the type of student that thought I could do it all myself. I didn’t need anyone else. In CICS you can’t do that, you have to lean on others. A huge part of the program involves teamwork. There are so many group projects. Eventually when I had people that I was really leaning on, that not only helped me mentally and emotionally, but it helped me learn more and gain confidence. 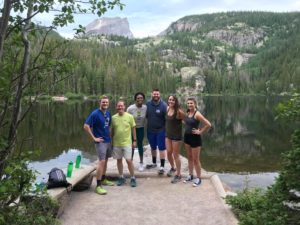 During a Colorado trip to attend NANOG (North American Network Operators’ Group) in June 2018, the CICS director Dennis Trinkle and some fellow students took a day to hike in the mountains.

How did CICS equip you with the skills to be successful in your professional life?

This might be cliche, but I learned how to learn. Undergrad was mainly writing and I was always strong at writing and I’ve always been personable. It wasn’t as challenging as grad school. In grad school and CICS I had to get very technical learning about networking and cloud-computing. It was something I had a high level of knowledge on, but I had never gotten deep into it. Having to dive into these topics was very scary, but it put me in a position where, professionally, I am not afraid to learn something I don’t have a lot of experience in. There were a lot of projects that were challenging for me. The one that had the most impact was the Accenture challenge, which is the company I went on to work for. The Accenture Challenge was a technical case study. There were business components and tech components you have to bring it all together in a very limited time frame. We had to create this 20-page document and a presentation to go along with it in a matter of hours. It was the timeframe that scared me the most. I was terrified at failing. My group did not win. I was really interested in the company and was scared they wouldn’t hire me since I wasn’t a part of the winning team. They still wanted me and hired me after the study. Having to be professional when I didn’t feel I was ready yet was something this case study taught me.