Dawn Araujo-Hawkins is a ‘10 Ball State alumna with a passion for religion journalism. Upon graduating from Ball State she continued her education to earn a graduate degree and started writing about religion, gender, and social justice. She currently serves as a news editor at The Christian Century. We sat down to discuss her time at Ball State and what happened after CCIM.

What kind of student were you at Ball State?

I was a super hyper involved student. I was on the staff, what was then Expo Magazine, now Ball Bearings. I did a couple projects for Ball Bearings which used to be online only. I was not technically on staff for the Daily News, but I would still jump in and do a couple stories for them. I worked in the Journalism Department as a student secretary. I was doing all the things all the time. I am still kind of like that now. The program that had the greatest impact on me was Expo Magazine. I decided my junior year that I wanted to focus on religion journalism as a career path. There’s really not a vehicle for that at Ball State, but I was able to make one. I wrote religious stories and snuck them in various ways. The type of editor I am today is based on things that I learned at Expo magazine. It shapes the collaborative way I edit now.

Was there any professor that stood out to you?

I think it’s hard to be a graduate of the magazine program and not say that David Sumner completely changed your life. It’s interesting to me because he actually got his start as a religion journalist. When I had that interest and expressed that to him, he was very supportive. I think some of the doors that were unlocked for me to sneak in my religion stories and his general supportiveness helped a lot. I loved all my professors, they were wonderful.

Was there a certain class that had an impact on you?

I think the great thing about the Ball State Journalism program is that it does not allow you to stay comfortable in what your area is. I’m a writer, but I had to take a design class, photography class, magazine management class. All of those things have come into play in my career. I wasn’t just allowed to be a writer. I would say those classes that pushed my boundaries and the skillsets they provided me with, I have found working in the newsroom, I am the only one with those skill sets. I am able to do things that other people in the newsroom can’t do, such as graphic design and editing audio. Those classes that pushed me beyond what I thought I wanted to do have proved to be of immeasurable value.

If you could talk to your freshman self, what advice would you give?

I actually transferred to Ball State as a sophomore-and-a-half. I started at Michigan State University. I had a great time there, but for personal reasons, I had to be closer to home. Being at Ball State ended up being one of the best and most significant decisions of my life. When I think about the person that I am professionally, personally, spiritually, and emotionally, none of that would have happened if I hadn’t been at Ball State.

What I would tell my first year self, going all the way up to East Lansing, is to relax. It seems like these decisions of where you go to school are so important and they are. Ball State changed my life, but not in any of the ways that I anticipated that college was going to change me. You don’t have to control everything. Your life does not depend on all these locations and decisions. It will all unfold in the way it is supposed to. I thought a certain degree and city is what made me, me. The classes and publications were smaller and more personal at Ball State and I was able to refine my skills in ways I could not have at Michigan State. This desire to become a religion reporter, which I now do very passionately, I don’t think I would have come to that conclusion at Michigan State. That was something that was specific to the atmosphere, students, the culture, and life at Ball State.

What was the moment you decided what you wanted to do with your career?

It was my junior year. I thought I really should get a religion minor, but I already had my French minor and was halfway through a Fashion Merchandising minor. I originally wanted to be a fashion journalist. I think it was the Summer of 2008, where I said no. I still like fashion but it wasn’t what I wanted to do with my life. I was really interested in how people perceive themselves in the universe and what that means for them. I really wanted to focus on religious beliefs or non-beliefs, as the case may be. That’s what I wanted to do professionally and really devote my time and energy to.

What was the best memory of Ball State University?

I loved everything I did at Ball State. I think it would have to be the late nights. We would get all the articles in for Expo magazine. The night before it had to go to the printer, all the editors would get in and we would spend all night getting the stories ready. Not a very efficient way to get a magazine put together, but there was this sense of camaraderie and family. We would be in the office until one or two in the morning making sure this got ready for the printer. It really bonded everyone together. I have really fond memories of that right now.

Did you have a favorite place on campus?

I am partial to the Art and Journalism building because that’s where I lived, essentially. I drove past it with my husband and he had never seen the Ball State campus. We drove past campus and I felt it in my heart. I also really like North Quad because it smells old, but in the best way. It’s like walking into this European experience because it smelled so musty and old.

What advice would you give to current students about life after graduation?

Similar to advice I would have given my younger self. Relax, you don’t have to control everything. Things will unfold like they are supposed to. It does help to know yourself and know who you are and what makes you tick. You need to take care of yourself when things are not ticking. Have a vision and have a purpose. 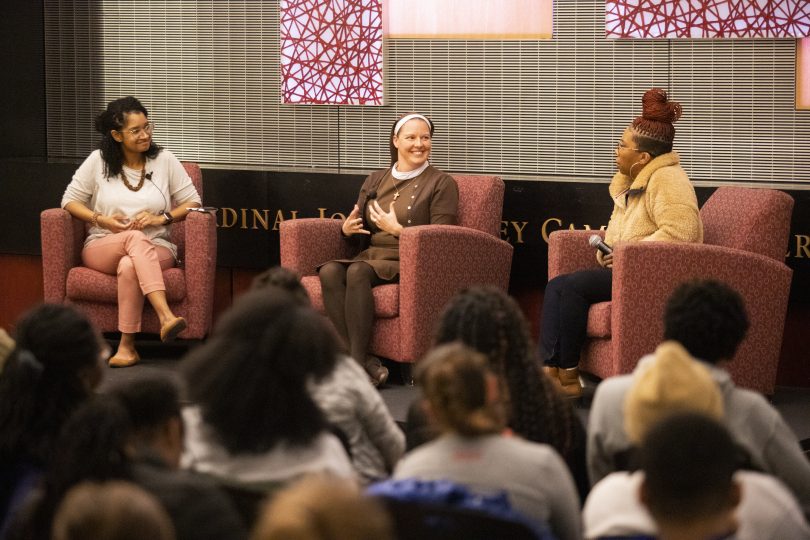 In February 2020, I moderated a discussion at the University of St. Joseph about racism and the Catholic Church with Alison McCrary and Leslie McSpadden (Michael Brown’s mother)