Garrett is a student filled with goodwill and determination. He looks past the “impossible” and instead sees opportunity — opportunities that foster his creative growth and benefit Muncie’s community at large. Through his award-winning documentary and his recent top-grade 3D technology work for the David Owsley Museum of Art, Garrett demonstrates that he doesn’t wait to make his mark.

We virtually met with Garrett to explore his diverse background, listen to his inspiring story, and look into the experiences that led him to where he is today.

Can you describe your journey prior to coming to Ball State?

I was born and raised in Logansport, Indiana, which is a small town about an hour and a half northwest of here. Baseball was my entire existence from three to eighteen years old. The thing I wanted to do was be a major league baseball player.

Then I got hurt playing baseball my sophomore year in 2012. I woke up in the hospital with a head injury and I realized I wasn’t going to be able to be a baseball player anymore. That’s when I started considering a path in journalism. I knew of Ball State’s robust journalism and telecommunications program, I mean, who doesn’t know about David Letterman?

However, I didn’t come to Ball State thinking I wanted to be the next David Letterman. Instead, I came with a very open mindset; I could become a reporter, a broadcaster, a teacher, who knows all the options?

I started in the fall of 2015 with a major in magazine journalism. I initially thought I could play for Ball State’s club baseball team. I was very wrong. Instead, I helped a couple of my friends in TCOM by acting in their projects. I’ve been in over 30 short films over the course of my time here.

How did this route impact you and your career trajectory?

In the fall of 2015, I was a dopey teenager coming to college, having a big-eyed look into the world. I was very optimistic. But in December of 2016, my best friend from childhood accidentally killed himself and it completely changed my outlook on the world. It really turned my bright optimistic look on life into a more realistic, almost darker look.

My junior year, [Unified Media Lab Director] Lisa Renze-Rhodes offered me the opportunity to write a story about the Muncie Community Schools (MCS). They were not in a good place financially and were about to be taken over by the state government, which is not necessarily a rare thing to happen. However, there was a rumbling in the State’s House of Representatives that Ball State could take over MCS, which is extremely rare. So, Lisa came to me and told me to start reporting on this.

I teamed up with Tony Sandleben, who was the big shot of the newsroom at the time. He had been following Muncie Community Schools for about three years at that point and here I was, trying to be like a Clark Kent journalist.

We started doing some in-depth research on MCS. Tony and I also added the element of a camera because Tony worked for NewsLink, which is Ball State’s student-led news broadcast. Keep in mind at this point, I was a magazine journalist, I knew about print and nothing else. I had never thought about video production as being part of journalism, let alone it playing a part in my future.

We decided to make a documentary and I suddenly realized that I didn’t know how to make one, so I quickly had to learn the ropes. Tony and I ended up interviewing 15 to 20 people. We both took that with a large amount of responsibility. It was the biggest story that I had ever had a chance to be a part of telling. For the first time in my journalism career here at Ball State, I felt like I was doing something meaningful to me — I was writing about a community in flux and a potential solution to best help these kids.

The documentary was finished on the day of Tony’s graduation. I stayed up and edited for 32 hours straight because it was going to air on WIPB the next day. I didn’t mind. I was really proud of our work.

I went into my senior year knowing that I didn’t want to be a magazine journalist anymore. I wanted to be a documentary filmmaker. I knew that our story wasn’t over because there was still a lot to be told with this takeover of Ball State and Muncie Community Schools. So, I put together another small team. This time, there were seven of us. We set out trying to make our quality of documentary much better and it took the entire year. 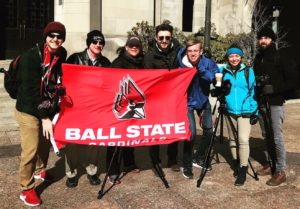 In the spring of 2019, Looker traveled with a documentary film crew to Boston, Massachusetts, to continue uncovering the story of university mergers with public community schools. Photo: Eric Pritchett

This situation with the Muncie Community Schools was also so rare. It only happened one other time in the United States in Boston back in the 1990s. We wanted to go out there and talk to people that were a part of that transition, so that’s what we did. We got on a plane — the first time I had ever been on a plane — we flew out there in the cold month of February or March, and we spoke to people. I believe we interviewed 33 people to put this story together. It was a major undertaking.

We ended up editing it by the end of the school year in 2019. I believe it broadcasted on May 20, 2019, and a year later, we were awarded a NATAS Student Production Award. We did not expect that. While it was a huge honor, we didn’t do this work hoping we would get an Emmy Award. We did it for the community.

You recently completed another impressive project for the David Owsley Museum of Art. Can you walk us through how you got to work with them?

Last year, my graduate program had me doing a lot of social media work, which was not for me. I heard that the graduate assistant working for DOMA was graduating so I contacted Dr. Brookey to see if I could apply for the position. Growing up, my dad was a museum curator, and some days after school, my brother, sister, and I would go to the museum. Since then, I’ve always been fascinated by museums. I’ve always wanted to work in one as a tour guide and I realized I could actually get to use the skills that I’ve been learning and work for a museum. It turned out that no one else applied for the position so they gave it to me. Working for them has been an awesome opportunity.

What did you learn from this experience and what challenges did you face in the process?

Over a Zoom call in the summer, they told me that they bought a 360 3D camera and they wanted me to learn how to use it. I said I could do it but when I got off the Zoom call, I had a mini panic attack; I had never used a camera like that. I later found out that it was pretty straightforward to use which was a nice surprise.

When I first started, I forced myself to swallow the intimidation and anxiety that I had inside of me. I tackled this with the same mindset I had for my documentary: to keep my mind focused on the certainty that I would get the job done. I also kept reminding myself that I should not drop the camera (laughs). 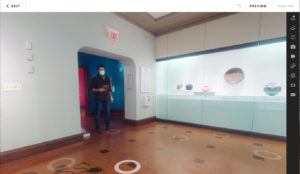 Through his second year of graduate school, Looker has worked with the Matterport Pro2 3D Camera, capturing the artwork of the David Owsley Museum of Art. Photo: Garrett Looker

The way the 360 camera operates is like stop motion photography, which was difficult for me to wrap my head around at first. I’d always find myself within the image because it captures everything within the space, so I had to learn to leave the area once I hit record.

Do you think this kind of technology is something you are planning to further in?

I would be interested in adding a story element to it. In the professional market, some people have been using cameras like these to create more interaction with their audiences. For example, The Atlantic or The New York Times have taken this technology and used it to further their storytelling, which is really interesting. I’m really interested to use this equipment for projects similar to that.

To hopefully go to New York this time next year. I believe my opportunities would be a little bit broader, not only for journalism and documentary work but also for acting or narrative film.

Who have been your mentors along your path at Ball State University, on or off campus?

My biggest mentor would be my mother and father, Brian Looker and Julie Looker, who have always been there for me and are also Ball State alums! My sister is also a student here at Ball State and is graduating this December. She’s the smarter one in the family.

In the academic sense, Lisa Renze Rhodes and Terry Heifetz were important advisors to me during those first two documentaries. In the last couple of years, Chris Flook has also been an amazing mentor to me. He really opened my eyes to all the things that I can do and is a great positive influence.

What are you thankful for this Holiday Season? 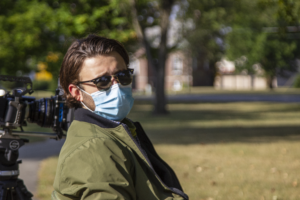 On set of his graduate creative project documentary, Looker has had the opportunity to speak with community leaders on systemic racism and how it affects the fabric of Muncie. Photo: Ashley Guenin

I’m thankful that even in dark times, opportunities are still there; opportunities for a student like me, that initially didn’t know how to use a camera. I was given people that encouraged me and provided a space of growth, allowing me to overcome the “impossible.”