Everyone, meet Senior Lecturer of Telecommunications, veteran broadcaster and Emmy-winning sound engineer Stan Sollars. 2020 was a year of milestones for Stan who celebrated his 50th anniversary in broadcasting and passed the 25-year mark of anchoring the Morning Edition on WBST/IPR. In this interview, Stan shares his perspectives as an audio production instructor and the adjustments he made to adapt to the new normal.

Could you share the personal journey that led you to become a faculty?

Once out of Ball State, [Stan holds his Bachelor’s and Master’s degrees from Ball State] I knew I would come back someday to teach. I enjoy listening to people and helping them as I can. Sure enough, only a year after graduate school, I was invited back to teach mass media courses in Ball State’s Department of Journalism. I did that for five years, left the university to do an Indiana history radio series, then returned to teach audio production in the Department of Telecommunications in 1992. I loved it then and still love being here to guide students from beginners to graduate school students, and helping to expand our technical facilities, all along the way. 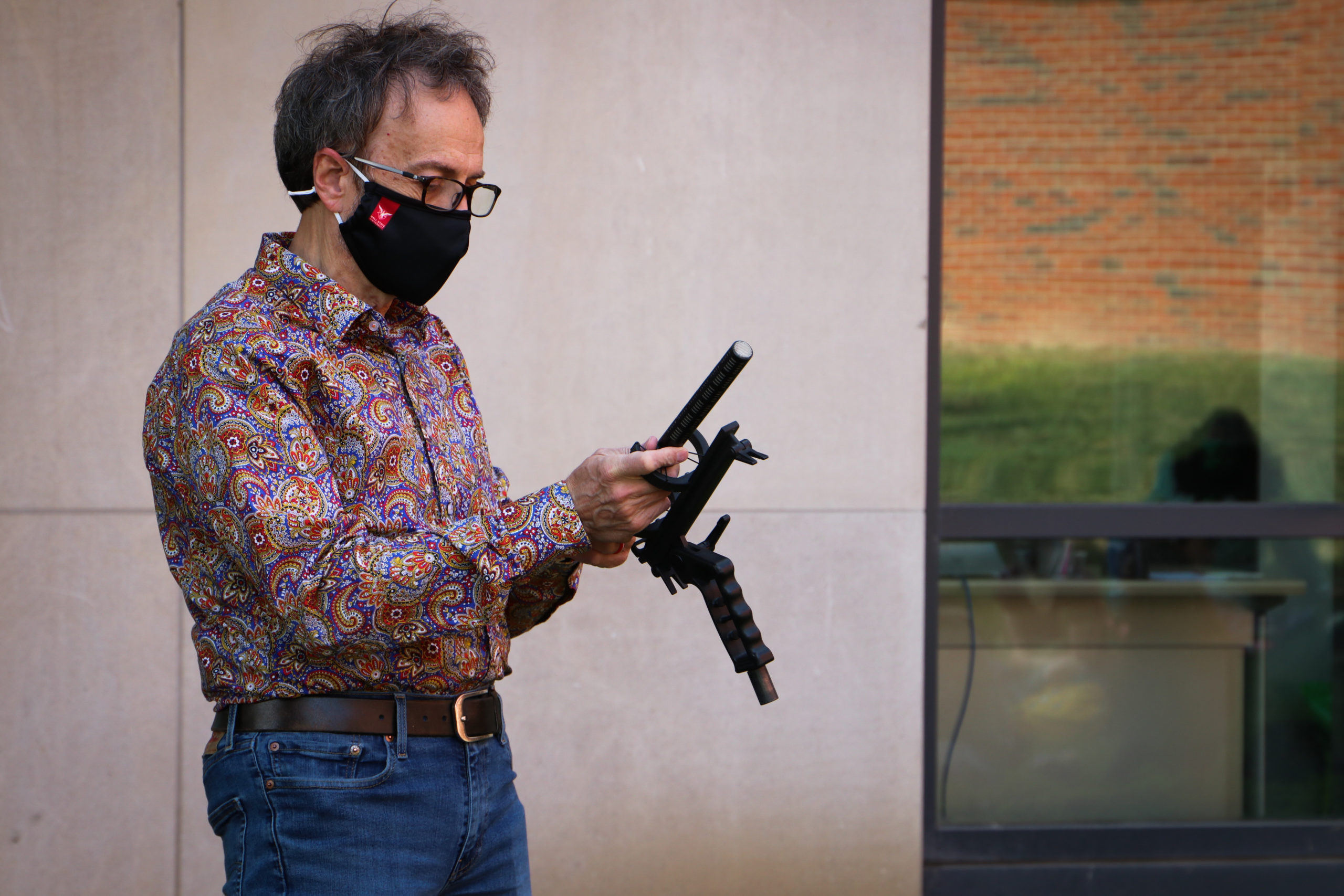 You teach a technical audio class. How do you manage to do that remotely in this COVID-19 context?

The fundamentals of sound remain the same in any venue. The tools, internet connection reliability, and web connection speeds can differ. I show students, online, how to tell stories with sounds. Then, I show how to capture those sounds with our gear, via on-camera, live instruction, and via our own tutorial videos. Then I show students how to shape their stories with our Pro Tools audio software, available in our Ball Building Mac lab, and in our Letterman Building facilities. Additionally, we are using Adobe Audition as many students already have that software. Whatever software they have, they can edit and mix their projects either at home or at school, safely, whatever they prefer. For high-resolution recording demonstrations, I upload files to Box that students may download and listen over their headphones or speakers, in stereo — much better than hearing a playback over Zoom or another gathering platform.

How kind of set-up do you have at your home office? 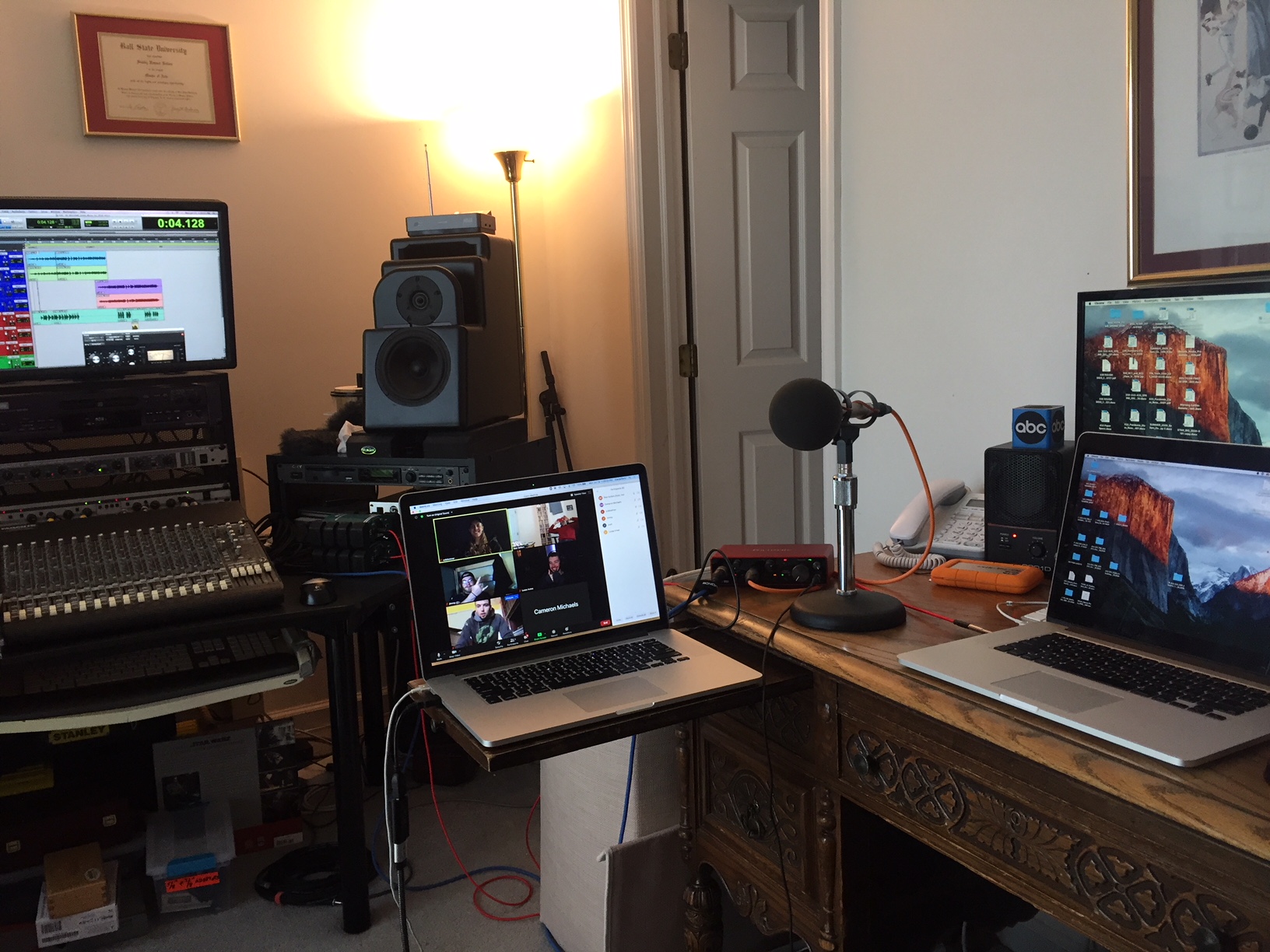 Here’s the setup I hitched up for teaching at home. Going from left to right, the Mac in the background is from my production bench that I also use for WBST/IPR news. Next over as we pan right, the Mac laptop is my Zoom computer where all of the students and I gather.

The Mac laptop to the right of the Zoom laptop is my playback computer for most of the Pro Tools music sessions that we analyze, and where I show mixing and mastering techniques. The video is linked via HDMI to a video capture card that terminates in a USB output to the Zoom laptop. I can switch between the Zoom laptop camera and the feed from the other laptop, with a mouse click. It is seamless.

The screen in back of that is my desk Mac Mini I use for email.

The throughput requirements exceed the capacity of a single laptop, so that’s why I have playback on one (or sometimes, two) computers, and Zoom on the other.

Just to the right of my Zoom laptop is a Focusrite Scarlett 2i2 audio interface, where I combine my microphone (Schoeps CMC-6U/MK-4 cardioid capsule) and the feed from the playback computer via USB input.

The mic goes straight into the 2i2. Audio from the playback laptop headphone connector goes through two BSS AR-133 direct boxes (left and right channels) for isolation, then into my bench’s Mackie 1604 mixer. The output of the mixer, including playback from my bench Mac, CD, and other sources, returns to the 2i2.

Earlier this month, you came back on campus to teach your first in-person class since the pandemic started. Can you tell us about your experience?

I was happy to see my students, albeit masked and at the proper distance away. I really miss them. I can also read facial expressions — at least the eyes — and body language, which help me to pace my presentations and pause for questions, better than I can do, online. 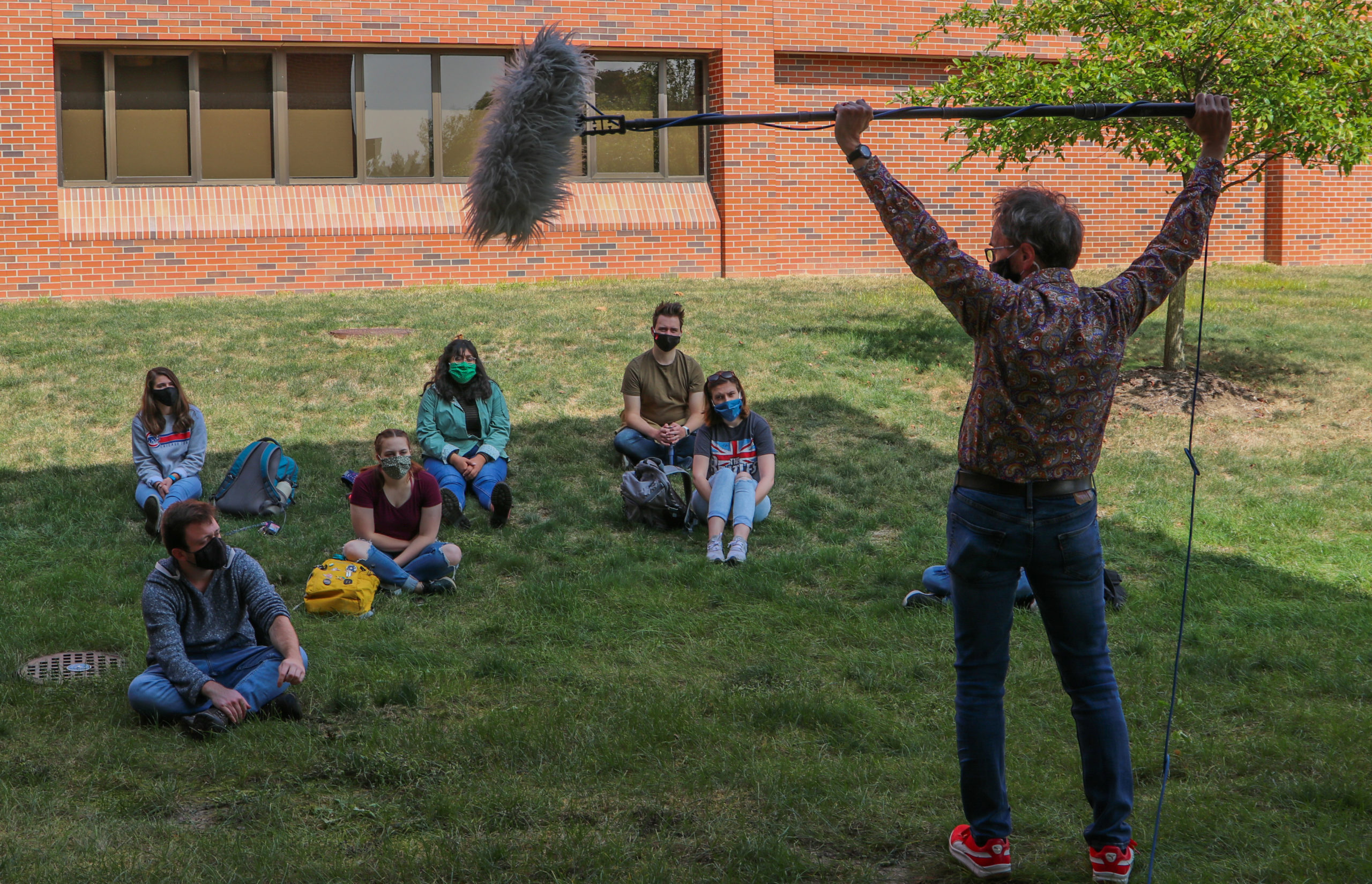 What was the proudest moment in your career to date?

There are several, but they all are in the same category: Seeing the lights come on in a student’s eyes when they show the moment of understanding on a given topic.  The ” ah HA, I get it!”  moment. Those are priceless.

Can you share one thing that people don’t typically know about you?

Beyond sound and audio, I have also shot a ton of 16mm film and video. I am a writer. I also produced a series for NPR in the late 1990s called “Rock and Roll America” that aired from Boston’s WBUR to KPBS in San Diego and in Europe. It was recorded, mixed, and edited at WBST. Additionally I was the announcer for the series (hosted by then BSU history professor Richard Aquila) and I built the edit bench on which I mixed the 60-plus shows we did for the network. I did all of that while still anchoring Morning Edition on IPR/WBST and teaching a full, four-class load. It was a blast getting mail and emails from all over the country and from Europe from people wanting to know more about American history and culture.

Thank you for this opportunity. I am proud to be a founding parent of CCIM. Let’s keep it growing! 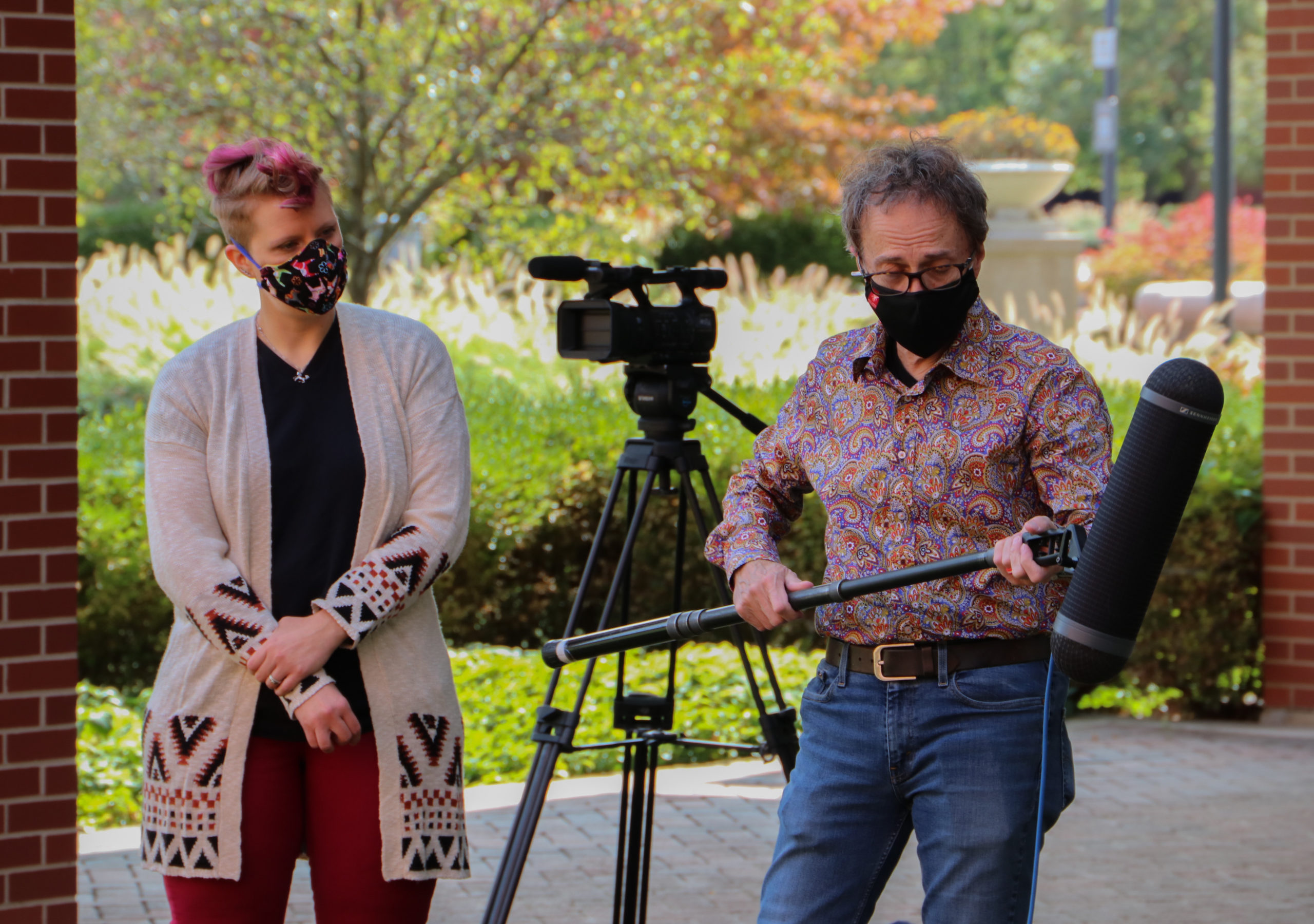