“The race is not always to the swift, but to those who keep on running” is one of my mottos. At age 74, I celebrated my tenth year of cancer survival by completing a 13.1 mile half-marathon in May. Since my cancer battle began in 2010 shortly after a run, I decided that running the Indianapolis 500 Festival Mini-Marathon on May 2, 2020 was the best way to celebrate ten years of survival. But then the pandemic came along. It came as no surprise when the race was canceled in March. I had been training with frequent four-and-five mile runs since December, so it was a great disappointment. Race organizers, however, offered pre-paid participants a “virtual Mini-Marathon” option, which meant we could run 13.1 miles any time and place and e-mail them our results.

I chose to run at Mounds State Park near home in Anderson where I frequently run or hike. The hilly Trail 5 is three miles long, so I ran it 4.4 times on May 22. The colorful race shirt and finisher’s medal was the reward. The medal is now framed in a case with medals from eight other marathons or half-marathons I have run since 1979. I’ve run the “Indy-Mini” twice before, and what I missed most this time was the cheering crowds, bands, and musicians who line the route from downtown, out around the Speedway race track, and back downtown to the finish line. 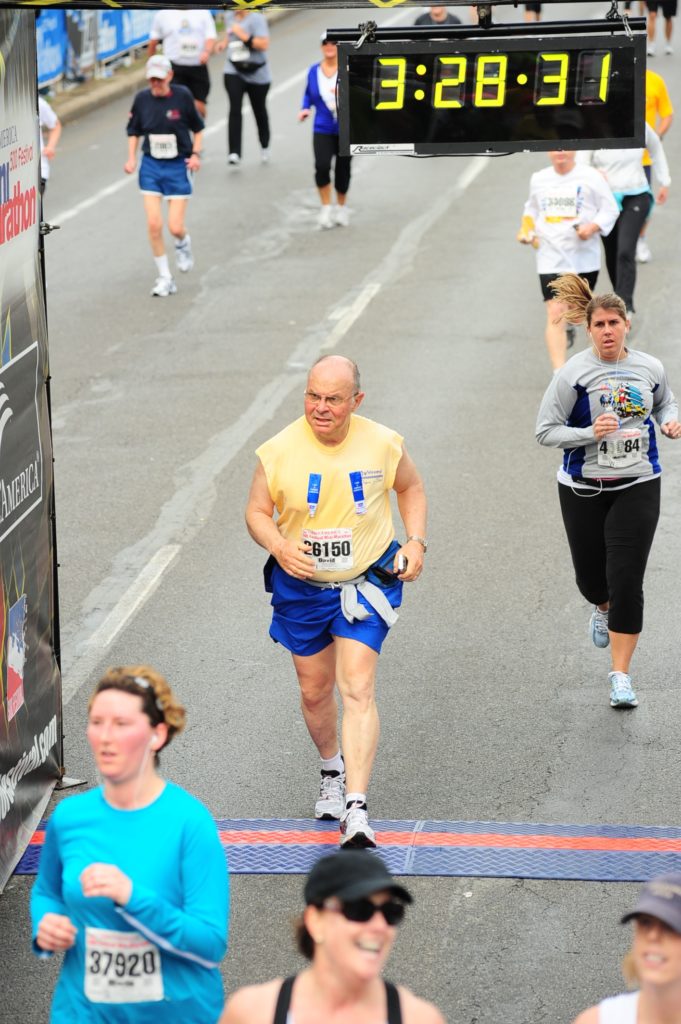 David Sumner crosses the finish line at the 2011 Indy Mini-Marathon.

This story began in the summer of 2010 after returning home from a seven-mile run. I noticed that my left breast was swollen and sore with a palpable lump. Since I knew men can get breast cancer, I was worried. I got it checked by an oncology surgeon very soon. He did a very painful fine needle aspiration in his Muncie office. After the pathologist’s report came back an hour later, he informed me that it tested positive for Stage 2b breast cancer. “For men, there’s really only one option and that is a complete mastectomy, and I highly recommend it,” he said. Feeling stunned, I meekly said “okay” and scheduled the surgery four days later at Ball Hospital.

Four months of weekly chemotherapy treatments and 33 daily radiation treatments followed the surgery. But the cancer has never returned—not a trace. During those treatments, I never missed teaching a class and never called in sick. What embarrassed me most was losing my hair, but I didn’t have much to begin with. My oncologist told me I experienced very little fatigue and few other side effects because I run so much and stay physically fit. Both the Daily News and Ball Bearings later interviewed me and wrote stories about my cancer experience. I also wrote a story about it that was published in the October 2013 issue of the Saturday Evening Post. I never felt embarrassed talking about it because I wanted people to know that men can get breast cancer and that having a cancer diagnosis is not a death sentence.

For ten years, I have followed the anti-cancer plan explained in the wonderful book, Life Over Cancer: The Block Center Program for Integrative Cancer Treatment by Keith Block, which I have recommended to dozens of friends, Block, a Chicago oncologist, promotes a holistic approach to cancer treatment that combines traditional oncology treatments with exercise, a diet heavy in fruits, vegetables and fish, and spiritual practice and meditation. (see www.Blockmd.com). His book combines results of medical studies with dozens of real-life stories about cancer survivors who adopted his four-pronged program. “My patients have shown me time and time again that exercise is among the most powerful ways to break the vicious cycle of decreased activity…and increased fatigue that strike so many people with cancer,” Block wrote. Since obesity is a primary contributor to cancer and I didn’t want to get it again, I lost fifty pounds in 2018-19 using a Weight Watchers program. While Block doesn’t advocate a specific religion, he believes strong spiritual resources fight discouragement and help maintain the courage to fight cancer. Finally, I’m very grateful for my wonderful wife, Elise, who has encouraged me every step of the way for 37 years.

To celebrate the end of cancer treatments in 2011, I ran the Indianapolis 500 Festival Mini-Marathon. I ranked 26,307th out of 35,000 runners but didn’t care where I ranked. I had defeated cancer for the foreseeable future, and I was the winner. I still feel like a winner. 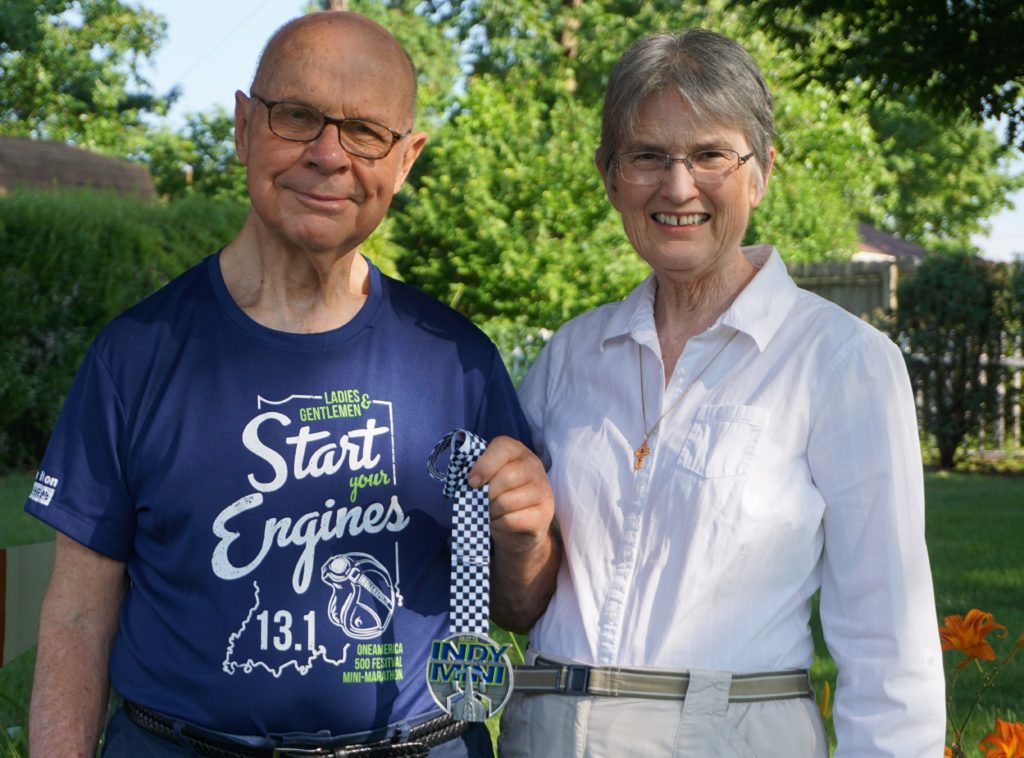 David E. Sumner, PhD is professor emeritus of journalism, who retired in May 2015. He was head of the magazine media track and adviser to Ball Bearings magazine from 1990 to 2015. During his 25 years at Ball State, he taught courses in feature and magazine writing, magazine publishing, opinion writing, religion reporting, and literary journalism. He is currently writing his eighth book, a biography of the legendary Big Ten football coach Amos Alonzo Stagg.