You made a short film for a class or with your friends, you premiered it in a campus showcase, and you’re probably wondering, “Where else could it go from here?”

How about a film festival?

Film festivals are not only a way to have your film play live before a variety of audiences, but among many other things, they’re also fantastic networking opportunities to meet other filmmakers and other members of the film industry.

Your time as a college student is a wonderful moment for you to start exploring the film festival circuit. But you might not be sure where to begin. As a film programmer who combs through a couple thousand submissions each year, I’m here to shed some light on navigating film festivals as a student and to share my top ten tips for success.

Also note: This post will mainly refer to short films, as that is the type of film students are more likely to make. The following tips come from my perspective; I do not speak for all festival programmers. 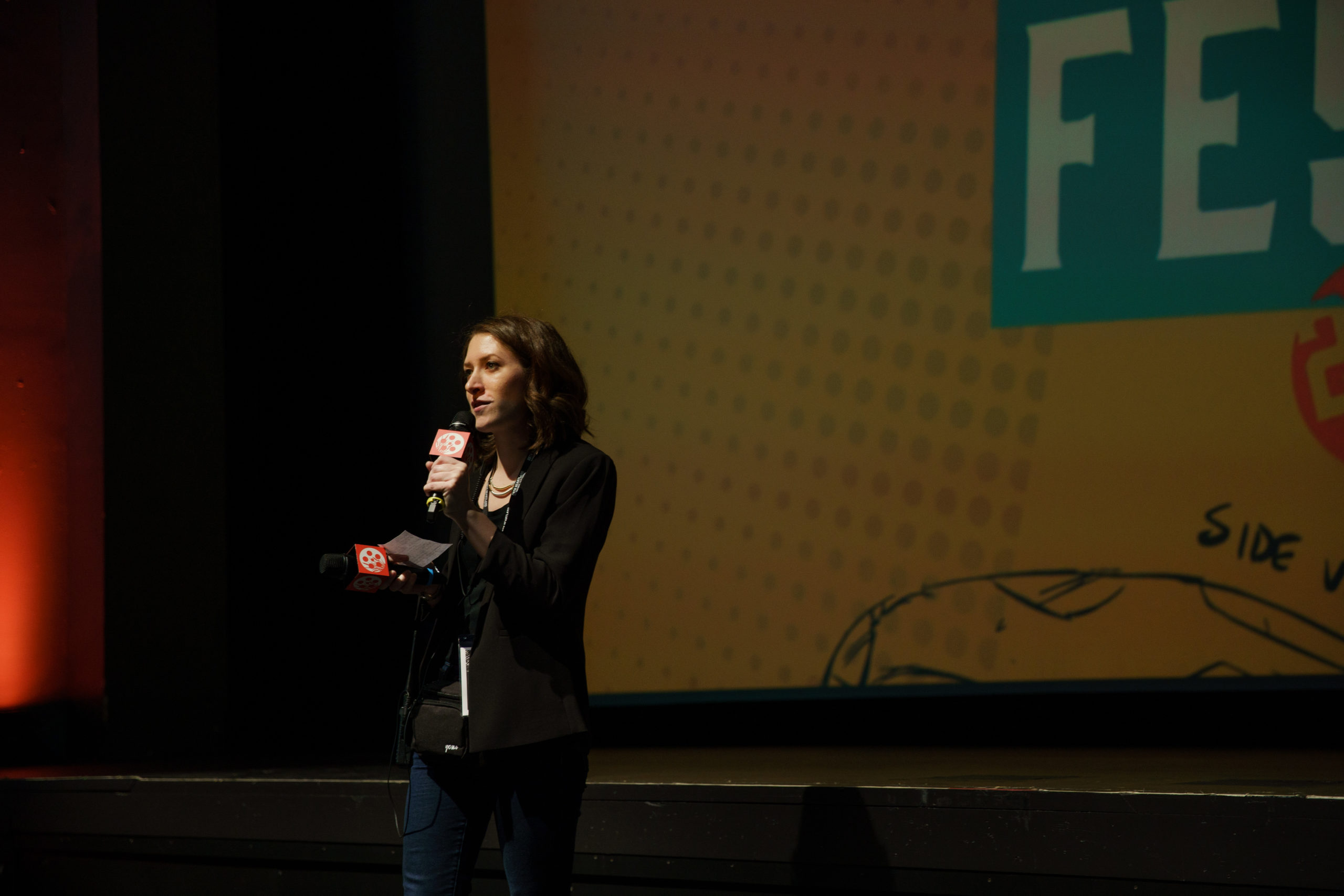 It’s always important to have a vision. What do you hope to achieve by having your short film at a festival? To share your art with a variety of audiences at many different festivals? Share your film with local audiences? Win an Oscar-qualifying award? Setting up your next project? Networking? Define what those goals are and plan your festival strategy accordingly. It’s also important to remember that industry giants like Sundance, Cannes, and Tribeca are not the end-all be-all. There are THOUSANDS of film festivals of all shapes and sizes around the world that showcase independent films and provide an enriching, fun experience for the filmmakers.

When you applied to colleges, you (hopefully) did a lot of research based on your goals and applied to schools that would be a great fit for you. The same goes for film festivals. Don’t waste your time, energy, and money applying to a bunch of random festivals hoping one will pick you–have a strategy. Start by setting up a FilmFreeway account. It’s free and it’s the main submissions platform that thousands of festivals use. There are great curated lists and sorting and filtering features for filmmakers to create shortlists of festivals based on deadlines, popularity, reviews, entry fees, genres accepted, and more. Take advantage of these features to help you find the festivals that are the best fit for you.

Also, dig deeper into each festival you’re considering submitting to. Visit their websites. Look at their past lineups to see the types of films they program. Check out their award categories and the past winners. Find out what the filmmaker experience is like. Follow the festival on social media. And most importantly, read their rules and regulations.

3. Fill in the Blanks

The same number one rule of school, job, and scholarship applications also applies to film festival entries: don’t leave anything blank. Especially contact info. Leaving basic fields blank conveys that you don’t care about your project, so be thorough! The information festivals request is there for a reason–programmers use it for tracking and to determine prize eligibility. Filling in the blanks helps everyone in the long run.

And if there’s a space to include a cover letter, write one! It doesn’t have to be a novel–just a couple of paragraphs. Introduce yourself. What’s the story behind your film? Any context you want to provide that’s not in your logline or summary? Why is your film a great fit for this festival? Has someone recommended this festival to you? Be genuine and tailor your letter to the festival (we can tell when it’s a generic copy-paste). In a sea of submissions, a cover letter adds personality to your entry and can help you stand out.

4. The Power of a Strong Logline and Summary

You will be ahead of the game if you understand this, as these are very important to the success of your film. First, know the difference between the two, and second, learn how to write strong ones that avoid spoilers or overselling your piece. Loglines and summaries are essential not only to your festival entry, but to promotion and ticket sales should your film be selected. Here’s a great resource to help you get started.

When you’re creating your film’s budget, don’t forget to save room for festival entry fees! Programmers understand that filmmakers, especially students, don’t always have an unlimited cash flow. But please note: entry fees are not a cash grab–they help film festivals run. Waivers and discounts are not given out lightly, and every film festival’s waiver and discount policy is different.

As a student, you have an advantage because many film festivals already offer a discount and sometimes even full waivers on entry fees for students. Most film festivals have a fee discount/waiver policy in their rules and regulations–read it before contacting the festival to ask for one. If you do ask, be sure to make your case beyond “I’m broke, give me money.” And if a festival doesn’t give you a waiver, it doesn’t mean they don’t want to see your movie.

Pro tip: Keep an eye on your target festivals’ call for entry windows and if you can, submit earlier when the fees are cheaper. FilmFreeway also has a featured discounts page.

With hundreds and even thousands of short films submitted to any given independent film festival, you need to give yourself a competitive edge. A great way to do this is using local ties, and I’ll use Heartland Film’s Indiana Spotlight Competition, part of both Indy Shorts and HIFF, as an example.

We started this category in 2014 to help encourage and highlight films made in Indiana or made by current or former Hoosiers. There are THREE cash prizes offered within the Indy Shorts Indiana Spotlight Competition: Grand Prize ($1,500), Audience Choice ($250), and Student ($1,000). I’ll say it again: STUDENT. There are only a handful Indiana universities with film production programs, so simply being a student at an Indiana university already gives you a shot at some cash.

Other film festivals around Indiana and elsewhere have similar sections in their programs, so when you’re deciding which category to enter, use whatever local connections you have to your advantage.

7. Know What Programmers Look for in a Film

It varies by festival, but the festival’s mission statement and their past lineups are a good hint. For Indy Shorts, we seek story-driven films that have a lasting impact on the audience; they do more than just entertain. Baseline, we want a solid blend of story and technical quality, and those elements are broken down in our evaluation system for our pre-screening team. Films are watched by at least two people at the initial level since opinions and tastes vary, and this process helps us determine films that would be a good fit.

However, a film’s overall quality is only a small part of the equation. As programmers begin to make decisions, we’re also thinking about things like: Does the film have a unique story/fresh point of view? Will it appeal to our core audience? Would the film attract new audiences? And since short films are divided into program blocks, we’re also considering whether a film will fit into one of those groups not only thematically, but also within time constraints. It’s not a one-size-fits-all process, and always remember: there’s a festival for every film, but your film is not for every festival.

Most of the short film submissions we receive are Narrative Dramas (and it’s a common genre in general). While we encourage filmmakers to make the types of films they want and tell the stories they’re passionate about, it doesn’t hurt to show other genres some love. Festivals are often in need of good Comedies, Romance, Sci-Fi, etc. to round out their programs. Plus, there are a lot of genre festivals out there that will love those films, too.

If your film is invited, attend the festival! Some pay for travel/lodging, many provide free filmmaker passes, food and beverage, fun parties, and more. Soak in as much as possible and go beyond basic participation in your screenings’ Q&As. Attend screenings other than your own. Chat with audience members. Go to the parties and mingle with other filmmakers and attendees. You never know who you’ll connect with, and you’ll also have a blast.

You should also make an effort to attend film festivals anyway, regardless of whether you have a film, and you don’t have to break the bank to do so. Regional festivals are wonderful, as they tend to focus more on the audience and filmmaker experience, and many offer a student discount on tickets.

Note: Audiences are more likely to attend screenings where filmmakers will be present. They love behind-the-scenes stories!

Don’t have a film ready to submit? Or just want to meet people or see how a film festival runs? Volunteer! Film festivals wouldn’t exist without volunteers’ help prior to and during the event, and it’s a great way to get experience, meet people, and receive perks like free tickets to films. From helping select the movies as part of the pre-screening committee to ticket taking and greeting patrons at the venues, there are plenty of opportunities to get involved, and there are film festivals everywhere year-round that are always looking for bright, enthusiastic folks to help put on the show. If you want to take it to the next level, many film festivals (like Indy Shorts and HIFF, *cough*) also offer internships.

Have a question? Want to talk movies or swap Ball State stories? Shoot me an email at jricci@heartlandfilm.org. You can also connect with me on Twitter (@julsrich) and LinkedIn.

I also hope you check out the 2020 edition of Indy Shorts (July 21-26), which will be a mix of online and drive-in screenings! For more info, visit IndyShorts.org.

Julia Ricci is Senior Film Programmer at Heartland Film in Indianapolis and a Ball State ‘15 History and TCOM grad. Heartland Film is best known for its Academy Award®-qualifying Indy Shorts International Film Festival (July 21-26, 2020) and Heartland International Film Festival (October 8-18, 2020) in Indianapolis. Since 1992, Heartland Film has awarded $3.5 million in cash prizes to independent filmmakers, the largest ongoing amount of any North American festival. Since 2011, 7 short films programmed at Heartland have gone on to win Academy Awards® with a total of 23 nominations. Learn more at heartlandfilm.org.