In recent years, drone technology has taken off in more ways than one. Television stations, filmmakers and production houses have embraced unmanned aerial systems (UAS)—also known as drones— to capture exciting footage at a fraction of the cost of a full-sized aircraft. To address this shift, CCIM is offering a new series of classes that introduces students to UAS. 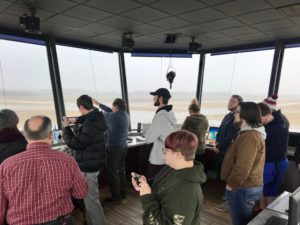 TCOM student Nick Kampsen shares what piqued his interest in the first place. “I am very invested in cinematography and every aspect of film production. Drone technology is still considered niche but its popularity is growing within professional cinematographer circles. I have always been interested in learning more about drones and how to fly them so when I heard about this opportunity, I was more than thrilled to partake.” For TCOM Associate Lecturer Tim Underhill, the class is also likely to give an edge to students once they go on the job market. “They gain practical skills that will help them get hired quicker and for a bigger payday than traditional production crews. Students will not only know how to safely operate drones to capture aerials, they will have hands-on experience thanks to a fleet of aircraft in the CCIM hangar.” He also stresses the importance of safety when using unmanned aircraft systems. “Anyone can buy a drone, but if you want to get paid, you need to be safe and legal. TCOM 299x classes are designed to do just that.”

“Students gain practical skills that will help them get hired quicker and for a bigger payday than traditional production crews.” 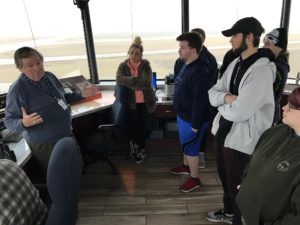 With the help of CCIM alumnus and CEO of Drone the News Zach Huffman, the class was designed in three modules, each one building upon the other. The first class took place at the Delaware County Regional Airport last weekend. “Students learned about aviation operations, weather patterns, understanding the FAA regulations regarding drones. They also learned basic airport operations, such as understanding the runway takeoff and approaches, along with some of the terminology” said Ryan Sparrow who co-leads the class. This first module ultimately prepares students to become certified with a FAA Small UAS commercial pilot license.

The group will meet again in February and start operating drones. They will have 17 new aircraft recently acquired by Ball State at their disposal. Nick’s excitement is palpable. “I have enjoyed learning about the regulations and safety measures so far, but now that we are transitioning into the hands-on section of the course and I am even more excited and cannot wait to start flying drones!”

To learn more about the class, contact Tim Underhill or Ryan Sparrow.