Accomplished Buffalo, N.Y., news broadcaster and Ball State University graduate Al Vaughters concluded his illustrious journalism career when he retired June 30 from WIVB News 4 team in Buffalo—and became the namesake of the newly established “Al Vaughters Day” that will be celebrated each June 30 in Buffalo. Observed annually, Al Vaughters Day, was declared by Buffalo Mayor Byron Brown, according to a WYRK report. 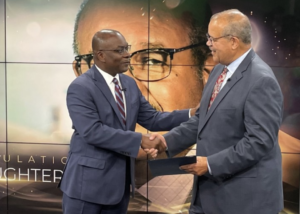 Mr. Vaughters spent nearly 30 years as a member of the WIVB News 4 team, including serving as a community watchdog journalist on community issues. His journalism achievements were honored and acknowledged with his induction into the Buffalo Broadcasters Association Hall of Fame in 2021.

“I’m just Al – just a blue-collar guy that grew up in the Midwest, trying to do my job as best I can. And when I help people, you know, that’s my job, I help people,” Mr. Vaughters said in a TV news report that aired on the night of his Hall of Fame induction, as noted in a recent WIVB (Buffalo) report about his retirement.

Mr. Vaughters has been an asset to his community and in the newsrooms where he worked. He has spent many late nights helping Western New Yorkers in need with situations that never made the news. He is also a board member of Spirited Athletes Bold at Heart (SABAH), and co-founder and vice president of the Buffalo Association of Black Journalists, WIVB reports.

Mr. Vaughters’ career was launched with a job in radio in Indianapolis. After that, he landed television jobs in Fort Wayne, Ind.; Dayton, Ohio; Providence, R.I.; and Chicago. Mr. Vaughters joined Buffalo’s News 4 in August 1994.

At Ball State, Mr. Vaughters earned his bachelor’s degree in Radio and Television. He was also a student-athlete on Ball State’s football team, earning a letter in 1973.

Read more about Mr. Vaughters’ career in these news reports from WIVB-TV and WYRK-106.5 radio.