Dr. Payne spent 41 years at Ball State, starting in 1972 as an assistant professor of Secondary Education and director of the Preparation of Teachers for Multi-Cultured Schools Program. He retired in 2013 having earned the titles of Assistant Provost for Diversity, Emeritus; Director of the Office of Institutional Diversity, Emeritus; and Professor of Secondary Education, Emeritus.

Dr. Payne was also heavily involved in various meaningful endeavors and organizations around Muncie and East Central Indiana. He was past president of the local Kiwanis chapter, Lt. Governor of the Wapahani Division, and was a dedicated member of the Bethel AME Church in Muncie, serving as its secretary for about two decades. Other boards, memberships, and organizations he served included Motivate Our Minds, Phi Beta Sigma Fraternity, Inc., Muncie Action Plan, and the MLK Dream Team.

Dr. Payne said he saw education as a liberation—perhaps a personal anecdote from his own upbringing. He was born the youngest of five children in 1942 in Philadelphia, Miss., at a time when states still practiced legal segregation. His father died in a car crash a few months before his birth, so his dad’s brother, Uncle Lawrence, offered to raise Charles and his brother. Living with their Uncle Lawrence and his wife, the Payne brothers had access to books and other advantages.

Dr. Payne was 4 years old when he contracted polio and was told he’d never walk again. Kids teased the future scholar: “Hey professor,” they’d say, never knowing Dr. Payne would one day respond to that title with pride—or learn to walk, which he did.

Dr. Payne graduated from Rust College in Holly Springs, Miss., with a bachelor’s degree in chemistry in 1962. He earned a master’s degree in chemistry from Tuskegee Institute in 1965, and a doctorate in Science Education from the University of Virginia in 1972. He taught chemistry for several years in the segregated public school system in Mississippi, and also taught at Mississippi Valley State in Itta Bena, Miss., before earning his doctorate and moving to Muncie and Ball State.

Dr. Payne’s legacy is felt in many ways at Ball State, but especially at the University’s Multicultural Center, which opened its new 9,500-square foot location in the heart of campus in 2021. Among the many annual Achievement Awards offered by the Multicultural Center is the Dr. Charles Payne Olive Branch Award, which is presented to a student who promotes diversity and cross-cultural sensitivity among all people; who strives to transcend all cultural and racial boundaries and; who best demonstrates tolerance and acceptance of diversity as expressed by the mission of the Multicultural Center to support and advance the University’s commitment to cultural diversity.

Dr. Payne is survived by his wife of 50 years, Dr. June Payne, their son, Dr. Gregory (Dr. Brittany) Payne, a son-in-law, Cavin Abram, three granddaughters, and two great-grandchildren. He was preceded in death by his daughter, Lauren Payne. 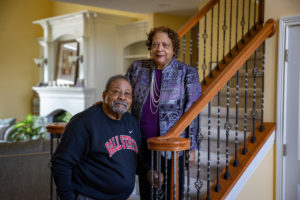 Kate H. Elliott, lecturer of Journalism at Ball State, contributed to this report. For more on Dr. Charles Payne’s life, career, and legacy, please read the Summer 2022 edition of the Ball State Alumni Magazine, available online at magazine.bsu.edu in late-July