In 1991, Terrell Smith applied for a patrolman’s job with the University Police Department (UPD) at Ball State. He recalls the interviewer asking him: “Why are you the best applicant?”

His reply? “I can’t tell you that I’m the best. But I can tell you that if you give me a chance, I’ll be one of the best ambassadors for Ball State that you’ll ever have.”

Fast-forward to 2021. Mr. Smith retired on Aug. 10 after 30-plus years of service, having earned the rank of lieutenant. There is little doubt he’s lived up to that promise he made many years ago.

In fact, Jim Duckham, UPD’s Chief of Police, said Lt. Smith’s approach to policing has made him a pioneer in the field.

Lt. Smith’s contributions go way beyond his badge—be it giving motivational talks to Ball State sports teams and student groups, helping students move into their dorms, working at literally thousands of campus events, traveling on the road with the football team and, in general, being a friend to anyone in need.

Understanding his upbringing can help explain why.

The Road to Ball State

A graduate of Southside High School, Lt. Smith was born and raised in Muncie. His father was a minister, and he credits the influence of his parents with his belief that service to others is the highest calling.

“I was blessed to have parents in my life that helped me understand that the best feeling you can have for yourself in this world is to help others,” he said. “And from the time I was a teenager, I started to think one of the best opportunities to do that would be as a police officer.  But first, I wanted to study criminal justice in college and play football.”

Lt. Smith did just that, lettering four years (1981-85) on the Ball State football team as a running back and kick return specialist. In his senior year, he ranked fifth nationally in kickoff return yardage. But while success on the football field came easily, his criminal justice degree would have to wait.

“Sometimes, life gets in the way, and I didn’t finish my degree,” Lt. Smith said. “But I knew I had unfinished business, and I promised my mom I’d get it done. And several years later, that’s exactly what I did,”

Starting in 1985, he spent several years as a reserve officer with the Muncie Police Department. He had a variety of other jobs, including managing a few fast food restaurants, until being hired by UPD in 1991.

“That day was one of the very best in my life,” Lt. Smith recalls. “I was blessed that day, and I knew God had put me in a place where I could do my best to make a positive difference in as many lives as I could touch.”

A Legacy of Campus Service

Gonzo Barajas, senior director for Auxiliary Services for Facilities and Events at Ball State, knows Lt. Smith as well as anyone on campus. For nearly 30 years, Mr. Barajas and Lt. Smith worked together at countless athletic, student organization, and general campus events. 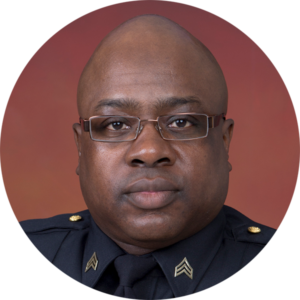 “Terrell is a big guy, but that’s not how he earns his respect,” said Mr. Barajas. “When he shows up for an event, he’s not there to ‘police’ you in the sense of strictly enforcing rules and regulations. Yes, he does that. But he’s gifted to be able to do that by giving people the sense he’s there to serve them. And that’s what he does.”

And what about Lt. Smith’s campus presence? Mr. Barajas says it is “incredible.”

“Terrell will show up at intramural league games, visit a distraught student, and generally make himself available wherever and whenever he feels he’s needed and can help,” he said. “I’ve seen him talk to our athletic teams, take off his badge, tell the coaches to leave and interact with the players as just another athlete, telling them to make good choices during their time at Ball State.

“There are many compliments I could pay Terrell,” Mr. Barajas added. “But perhaps one of the greatest is the simple fact just about everyone on campus knows him and respects him. His positive reach is an amazing thing to see.”

UPD Capt. Rhonda Clark, herself a 30-plus year veteran of the force, fully agrees.

“Terrell and I did the midnight shift together when we first started, and I could tell then that he was special,” she said. “He’s like a member of our family.  In fact, to my two girls, both of whom are Ball State students, he’s ‘Uncle Terrell.’ He’s going to leave a big void on this campus.”

Ball State President Geoffrey Mearns sees a close link between Smith’s contributions and one of the University’s core values of service to others.

“Lt. Smith is known for his warm smile and his quick wit. He is beloved by many of his colleagues, our students, and many more of our graduates,” President Mearns said. “I know he has been inspired and encouraged by our University’s mission. I’ve certainly been inspired by him.”

Looking Back on a 30-Year Career

When asked what changes he’s seen on the Ball State campus since he began in 1991,  Lt. Smith admits that’s a tough question to answer.

“Of course, the primary change would be the huge growth in new buildings, enrollment, and awareness of just what a great institution we have here,” he said. “But the mentality of the students is still very focused on succeeding, and for the most part, the student body doesn’t cause us all that much trouble. 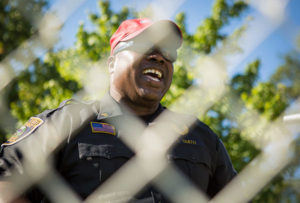 “But social media really took hold during my career,” Lt. Smith continued. “And that means things happen at a much faster pace and can be harder to anticipate because that means communication is immediate. And for us at UPD, that can sometimes work for us, or against us. Things can now happen in the blink of an eye.”

As expected in a lengthy career in law enforcement, there are times of danger and times when split-second decisions need to be made. Lt. Smith says he was not exempt from this in his three decades serving and protecting the local community.

“My prayer is that when I was involved in serious arrests and incidents, I conducted myself in a way that was professional and was in the best interests of not only myself and the University, but in the best interests of the person I had to confront,” he said. “There were times when my finger was on the trigger, but God whispered to me, ‘Not yet and not now, Terrell.’  For that, I am forever thankful.”

At this time, Lt. Smith has no concrete plans for retirement, other than to take a deep breath, decompress a bit and see what the future may bring.

“I know that I will keep busy and try to find an opportunity to continue to help others the best I can,” he said. “I was absolutely blessed to spend over 30 years on the Ball State force. I owe so much to so many.”

That gratitude is a mutual feeling for the University and its police department.

“Lt. Smith is as close to being irreplaceable as they come,” Chief Duckham said.

A campus-wide reception for Lt. Terrell Smith will take place from noon to 3 p.m. on Tuesday, Aug. 17, in Worthen Arena’s Gate 1 area. All are invited to attend.