Can you name the man who’s widely credited as being “Muncie’s Pioneer?” If you answered Goldsmith Gilbert, you’re likely among the relative few who would get it right.

But, right or wrong, do you really know the true story of how history has portrayed him?  And is there more to the story beyond Gilbert himself?

Those questions and more are at the forefront of a project being taken on by Ball State’s Applied Anthropology Laboratories (AAL) to create a public educational program for all ages based in archaeology and history about the heart of downtown Muncie and the creation of Delaware County.

“We’re not starting with the goal of rewriting history,” said Caroline Heston, education and outreach coordinator for AAL. “But recent research has shown us that there’s so much more to this story than what might be considered the ‘official’ version. We will be diving in to some areas that have never before been investigated.”

AAL will work with multiple community partners, all having important roles in the project, including Muncie American Legion Post 19, the Miami Indian Nation, the local Delaware Indian Tribe, and the Delaware County Historical Society. The project will include archaeological fieldwork and historical background research, and will eventually result in digital lesson plan tool kits for local educators. The project will also include a website that features videos, photos, and 3D scans.

But before the goal of the overall project can be fully appreciated — including the importance of those partnerships and its ensuing lesson plans — let’s take a moment to meet Goldsmith Gilbert.

Goldsmith Gilbert: the man, the myth, the truth

Goldsmith Gilbert is generally considered a founder of Muncie and Delaware County. He was central to the events of founding Munseytown and early operations of county and city government. 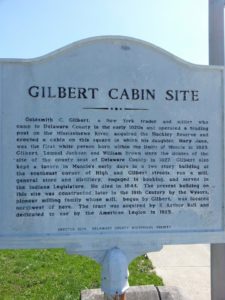 In the mid 1800s he acquired the land that the city sits upon from an American Indian named Rebecca Hackley, promising to purchase her reserve. However, she spent years in a legal battle before receiving full payment. Gilbert’s activity during this time remains written into the city’s geography and includes Gilbert Street, Reserve Street, and Hackley Street.

Yet the history of Hackley’s reserve, how Gilbert acquired it, and the related stories of removal and erasure are not widely known in the Muncie community. Additionally, there has never been an archaeological investigation at Goldsmith’s cabin site that was located at the current location of American Legion Post 19 at 418 N. Walnut Street.

Early government meetings were held in this cabin where Gilbert also operated a tavern. He donated a large parcel of land just south of the cabin for use in platting the original city of Muncie.

Most of this donation is included as a historic district listed on the National Register of Historic Places (NHRP). However, the Gilbert Cabin site is not in one of Muncie’s historic districts, and an additional goal of the AAL project is to provide the research for it to be included.

A closer look at the area’s history

Initial research has shown that Gilbert has a complex history of deception and nonpayment to American Indians for his own gain. Using archaeology of his cabin as a draw, AAL will start a community conversation exploring the ways Gilbert deceived and exploited to obtain power, but also explore past and present American Indian resilience, such as: Rebecca Hackley fighting in a legal system stacked against her to receive payment; and modern Miami and Delaware Indians still reclaiming and restoring what is rightfully theirs.

The project will start to explore past and modern Muncie citizens’ active part in the erasure of American Indian perspectives and the general narratives of our collective history.

“Of course, Goldsmith Gilbert is central to the truths we’re seeking from this project,” said Kevin Nolan, AAL director and senior archaeologist. “But my greater interest from this effort is arriving at a place where we can show what life was truly like at the time of the city’s founding and shine a light on the what really took place during that time.”

As an example, Heston points to an existing historic marker near the site of Gilbert’s cabin. 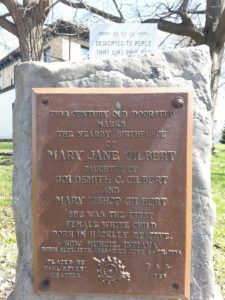 “The historic marker honoring the birth of Mary Jane Gilbert, daughter of Goldsmith and Mary Bishop Gilbert as ‘the first female white child born in Hackley Reserve’ is certainly accurate,” she said. “But it’s also an example of how Gilbert is portrayed in our current history.

“We are not engaged in conversations about changing or altering the signage,” continued Heston. “I reference these signs because they are perfect examples of how Goldsmith Gilbert is presented. Goldsmith Gilbert contributed significantly to the early days of our community and was an active member. This project has no intention of taking away his impact, nor could it. Our goal is to explore additional details, different perspectives, and converse about complex histories that aren’t as simple as they’ve been presented. Additionally, the way we think about, present, and talk about our history form our present and future.”

The role of the community partners

Each project partner will make important contributions and has a vested interest in the final products. The American Legion Post 19 has the vital role of providing access to the site, institutional knowledge about the site, and personal accounts of American Legion history and meaning. As stewards of the site, they want as much information and preservation of its history as possible.

This project is important to the Delaware Tribe Historic Preservation Office because researchers say the history of Goldsmith Gilbert/Rebecca Hackley is a hidden and common theme in Delaware removal history. It was often the case that land speculation soon followed illegal encroachment in a world in which American Indians had no fair legal recourse. This is ultimately what forced Delaware landholders and families to continue moving further west. The Delaware Tribe wants to highlight a documented example of this in Indiana as part of a larger hidden historical theme of their people, and especially bring this story into classrooms.

The AAL’s mission is to provide hands-on, experiential learning opportunities for students.

For this effort, students will be involved in the fieldwork, the analysis, the background research, and developing the products (websites, reports, lessons, etc.).

“Every project we do typically has considerable student involvement,” Nolan said. “We get over 10,000 student hours every year, and most of these are paid hours working on grants and service contracts with community partners. The Gilbert project will provide some outstanding opportunities for our students.”

Financial support for the Goldsmith Gilbert project is currently being sought by the AAL. The effort received several gifts as a part of One Ball State Day, and a proposal for funding is currently being considered by the Indiana Humanities.

Individuals interested in supporting the project can make tax-deductible donations through the Ball State University Foundation with a designation to Applied Anthropology Laboratories Fund #530.