She hopes her participation in the April 3 Carmel Marathon, in Carmel, Indiana, will help get that dream back on track.

Her goal is to compete as part of the national marathon team representing her homeland China in this year’s Summer Olympics in Tokyo. 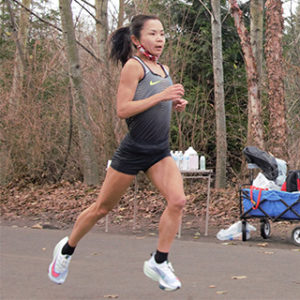 Due to COVID-19 pandemic restrictions, Liu is unable to travel to China to compete in the Olympic marathon trials scheduled for later this month. She hopes Chinese national Olympic team officials will consider her Carmel Marathon finish time for their Olympic team selection. Liu is aiming for a full-marathon finish of two hours and 35 minutes (2:35:00). As of April 1, her personal best full-marathon finish was two hours, 38 minutes and 34 seconds (2:38:34).

“Once I came to the states, I picked up running. I found out that I’m actually pretty good at it, and we all like to do the things we are good at,” Liu said. “Chasing a faster time is a way to challenge oneself. There are so many things in life that can be challenging, but not as easy to quantify. A marathon [completion] time is something you can quantify. You can see yourself getting better.”

Liu’s first marathon was in 2010 in Seattle, Washington. After that, she relocated to Muncie to attend Ball State, where she earned her PhD in Human Bioenergetics. She spent a lot of time in the campus’ Human Performance Lab.

“When I was at Ball State, the lab had a group of highly motivated individuals that challenged each other, both academically and athletically. My mentor is an endurance cyclist and swimmer, and almost everyone in the lab exercised on a daily basis. I also ran to the lab in the morning, and elsewhere, as a commuting tool. In fact, I didn’t drive for my entire time at Ball State.”

After graduating in 2014, Liu returned to the Seattle area and started work in her current position as a research scientist at the University of Washington. Part of Liu’s work-home balance is achieved through her running, which has been part of her daily life. When she’s not training for a competition, Liu runs an average of 50 to 60 miles per week, she said.

“It’s part of my routine. Running relieves stress. It helps me clear my mind so I can find solutions to problems, and get good ideas. Through running, I have met so many amazing people that were super supportive. Without them, I could not get where I am now,” Liu added.

By the middle of April, Liu should know whether she has been chosen for China’s national Olympic marathon team. If she doesn’t make the team this time, Liu said she wants to try again for the next Summer Olympics, slated for 2024 in Paris, France.