The annual Sundance Film Festival is widely recognized as the largest, and most prestigious, independent film festival in America. Countless producers, directors, and writers have tried for years to have their work selected to premiere there. Many never succeed.

And that is why 2014 Ball State TCOM alum Alicia Herder remains grateful, euphoric, and still somewhat in a state of disbelief that the film she co-produced with boyfriend Marcel Perez in 2018, La Leyenda Negra, was selected to premiere at the 2020 Sundance Festival.

“When I was at Ball State, I dreamed about having a film in Sundance,” Herder said. “I thought it would take decades to do something like this, if it ever happened at all. So having it happen this quickly is still a source of amazement to me. And in my heart, I know that if not for my time at Ball State, this would never have happened.”

Finding her passion and purpose

In late September, 2011, Herder, a native of Carmel, Ind., was a sophomore at Ball State car-pooling with good friend Sam Morgan, ’12, now an accomplished writer and actor. Morgan will be playing the role of Patrick in the upcoming 11th (and final) season of the popular Showtime series Shameless. His credits also include playing Alicia Silverstone’s love interest (Adam) in the Paramount Network show American Woman.

“We were traveling from a student film shoot that was shot three hours away in the director’s family’s barn,” Herder recalled. “On the ride back, Sam was telling me about his application process for grad schools, and how he was only applying to the top five film schools, AFI, NYU, Columbia, USC, and UCLA. And right then and there, I knew I wanted to be a film director.”

For Herder, it was a life-changing conversation. She went on to pursue a path similar to Morgan’s (he was accepted to NYU’s film directing program). She applied to those same schools when she became a Ball State senior.

“I decided that very day that I would do everything in my power while at Ball State to make myself an ideal grad school candidate. I had a powerful, singular focus for sure.”

“I’m not at all surprised that Alicia is having the success she is because she works harder than just about anyone I know,” he said. “Early in her freshman year, she showed up at my office without warning to see how she could get involved in making projects. She spent the next four years working on any project she could get her hands on. All of that hard work is paying off, and she deserves all the success she gets.”

Already a double major of theater directing and video production, Herder earned mostly straight A’s. On the TCOM side, she was a member of the Student Advisory Council, President of Cardinal Filmworks for a year, directed one short film for a TCOM 334 class, assistant-directed the 2012 Ball State summer movie, interned at the NYC non-profit Women Make Movies in summer of 2013, and wrote/directed/produced two other short films outside of class—one which she used as her film sample to apply to grad school.

On the theater side, she assistant-directed three plays, and directed Sarah Kane’s 4.48 Psychosis, for which all proceeds went to the American Foundation for Suicide Prevention. She was also chosen as the Midwest Regional Champion for directing at the American College Theater Festival her senior year and was flown to Washington, D.C. for nationals.

“I will never forget standing on the balcony of the Kennedy Center overlooking the Potomac River when I received a phone call from a Los Angeles area code congratulating me on my acceptance into the UCLA film directing grad program,” said Herder. “Without the outstanding support from my teachers at Ball State, and without the many opportunities to hone my skills that Ball State affords, I know this would never have happened.”

The road to La Leyenda Negra and Sundance

In her final year at UCLA in 2018, Herder found herself in post-production for her thesis film, Good Girl (shot in Muncie), and a teaching assistant for the thesis prep class. At a retreat two hours away from Los Angeles at Lake Arrowhead, Herder and 24 other graduate candidates were stuffed into a cabin and spent 16 hours daily reading each other’s thesis scripts.

“I only read the first act of Patricia Vidal Delgado’s thesis screenplay, La Leyenda Negra, and I immediately fell in love with it,” Herder said. “I knew right then and there I was going to be involved with it.”

The story is a classic “coming of age” saga about an El Salvadoran teenager named Aleteia who is a new student at Compton (California) High School.

Aleteia, like all teenagers, is just trying to figure out who she is. She develops a crush on another girl at school (Rosarito), she’s trying to navigate her way through a new school, and she wants to beat the odds and get out of Compton with her full-ride scholarship to UCLA.

However, as the script goes, after the Trump Administration decides to end the Temporary Protected Status (TPS) for El Salvadorans, Aleteia’s life and dreams are thrown into jeopardy. Even though she was brought to the U.S. as a child and this is the only country she has ever known, Aleteia risks deportation as an undocumented immigrant. Every dream she pursued, every relationship she built, everything about her life past, present, and future, she may now lose.

“I admit, I’m a sucker for anything involving growing up, social justice issues, and the struggles involved,” Herder said. “We shot the film in June 2018—one week after I graduated from UCLA. It was a difficult shoot—18 shooting days in peak California heat. But, I loved every minute of it.”

In December 2019, Herder found out La Leyenda Negra was an official selection of the Sundance Film Festival and would have its world premiere at the 2020 festival.

“Marcel heard the news first,” Herder recalled. “When he called me, I thought he was kidding around, and I didn’t think he was being funny at all. But he finally convinced me it was the truth, and it was the best feeling in the world.” 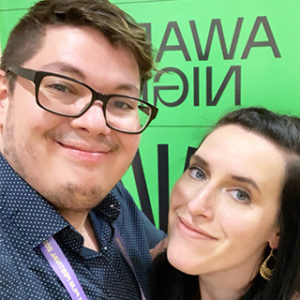 Marcel Pérez and Alicia Herder at the Sundance Awards Night.

Having a film screened at the Sundance Film Festival can be a both an exciting and stressful experience. Cast members, directors, and producers attend numerous media events and parties, and are kept incredibly busy marketing and promoting the film to every person they encounter.

“Our premiere was screened at the iconic Egyptian Theater in Park City to a sold-out audience with a Q&A after the film,” said Herder. “The audiences were engaging, thoughtful, and unafraid to ask bold questions.”

Herder and her fellow cast and crew members answered questions and engaged in discussions about the current state of immigration, imperialism, LGBTQ love and gender identities, and even what life is actually like growing up in Compton (all five of the teenage cast had graduated from Compton High School).

“We were able to share a Latinx narrative that not a lot of U.S. audiences are able to see in the media,” Herder said. “One of the best aspects for me was having so many people come up to us and thank us for making it.”

The film has been screened and honored several times after its Sundance world premiere and  can be watched on the HBO Latino channel and streamed on HBOMax.

These days, Herder finds herself fulfilling a dream to live in New York City, where she freelances and writes screen plays.

“Sundance looks fantastic on my resume, but right now, I’m ready for the pandemic to ease up and then maybe my checking account will look just a bit brighter,” Herder joked.

Whatever the future holds for her, Herder will always cherish the lessons she learned at Ball State:

“I don’t know where my career will take me next, but I still want to direct films and television, align myself with social causes to bring about change and restore empathy, and produce projects that shine a light on minorities and women’s stories,” she said. “Yet, I know that if I continue dreaming, I can make those dreams a reality. That’s what my time at Ball State taught me.”