After graduating from Ball State in 2004 as an advertising major, Malina Simone Jeffers faced a big decision. Should she return to her hometown of Indianapolis, or seek her destiny in a larger city like Chicago or New York?

“When it became clear that my friends were moving to cities that had more to offer culturally, I took the opposite approach—to make my city more culturally attractive. I thought, since so many people are going to other cities for the same opportunities, I’ll just learn from those cities and then create the opportunities here.”

Jeffers has carried on with that commitment. She began her career organizing a series of performance-based public events for underserved communities. As director of marketing at Madame Walker Legacy Center, she developed new programs and branding related to historic Indiana Avenue and the city as a whole. 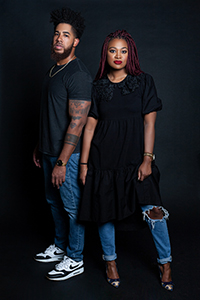 “I love my city and what it’s taught me, how it’s raised me,” she said. “So, the civic pride aspect wasn’t a stretch for me. I’ve been called Indy’s cheerleader for a long time now.”

This year, Jeffers took on her biggest challenge so far, co-founding the cultural development firm GANGGANG with her partner, Alan Bacon.

With initial investments from the Central Indiana Community Foundation and other philanthropies, GANGGANG seeks to promote and invest in culture entrepreneurs, with a strong commitment toward racial equity. During its first three years, GANGGANG plans to invest at least $100,000 into cultural startups, with 70% of those investments allocated to Black founders and Black-owned startups.

Jeffers recently took time out to discuss GANGGANG, her time at Ball State, and her passion for cultivating and promoting Indianapolis’s richly diverse culture:

What need is GANGGANG designed to fill in Indianapolis?

Indy has made incredible strides in the arts landscape but we’ve also got a long way to go. Think about why you visit your favorite places and what makes America’s best cities the best? It’s culture. It almost always comes down to arts and culture. So, if we’re seeing a talent drain, we need to take a hard look at our arts scene and ask questions about the infrastructure we’ve built to support it, or not.

GANGGANG has built itself to do this work solely and to make room for Indy to have an organization that is completely dedicated to building the cultural sector and making the creative economy more equitable. 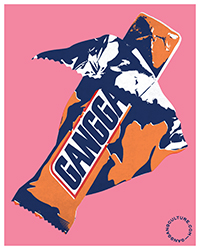 So, economics is central to the concept of GANGGANG?

Yes. I’m a cultural entrepreneur. I know what it’s like to have creative ideas and products and have limited access to dollars to support those ideas. It’s tough for culturalists in the for-profit lane especially, because you can’t approach philanthropic entities with your idea. Nor can you approach traditional investors as your idea is outside of their wheelhouse. So, where do you go? That thinking led to a component of GANGGANG that funds cultural startups and entrepreneurs.

Did you grow up in Indianapolis?

Yes! I grew up in the Watson-McCord neighborhood where my Dad got me and my siblings really involved in community work early on. I enjoyed living in Indy; I have a lot of family here and have grown quite the village.

Why did you choose Ball State for college?

My senior year at Brebeuf [a Jesuit prep school in Indianapolis], I fell in love with graphic design. I’d found out that Ball State had a really great design/architecture program, so it felt like a good fit. As it turns out, I didn’t get into the graphic design program at BSU and that prompted some introspection. I realized that I enjoyed graphic design because of its influence on consumers. So, advertising was the perfect major for me and I’d absolutely choose it again.

I learned a ton from my advertising classes; especially the case study we had to write as we got closer to the degree. Advertising taught me so much about how people view themselves, the world and each other. It was taught to us in a way that allowed appreciation for human behavior, and consumer habits. I took anthropology and sociology classes because of this deeper interest into the psychology of advertising.

What are some highlights of your Ball State experience?

Oh gosh, there are so many. I think of “AJ”—the Art and Journalism Building—where I spent so much time and learned a lot. I think of sororities and always admiring the women of Alpha Kappa Alpha as they brightened the campus in their pink and green. I think of riding and then driving the shuttle bus from Sterling Apartments to campus as a means to pay my off-campus rent. I think of sociology class, which I didn’t do well in but loved. And, of course, I think of all of the amazing friends I met along the way.

Diversity and inclusion are important strategic goals at Ball State. What was your experience here as a student in that regard, and what advice might you give the University as it continues moving forward?

I had a great experience at Ball State as a Black young woman. Like at most schools—in high school and in college—the Black population gravitates toward itself and we create our own community.

I hope Ball State is nurturing and celebrating that sense of community. I’d encourage my alma mater to not think of diversity-inclusions efforts as aspirational but as the most important next step it’s making right now. Aspiration tends to make us think we have more time than we do and that the challenge is harder to tackle than it really is.

What do you like to do in your spare time?

I love to write, hang out with my two daughters, have late dinners with Alan, watch trash TV, and bury myself in everything design related: fashion, furniture, visual communication—all of it!