First and foremost, Veterans Day is about honoring the men and women who have served our country for their sacrifices and commitment.

At Ball State, though, the day is also an opportunity to reflect on veterans’ critical role in the institution’s history, helping transform it from a relatively small college into a mid-sized, multi-dimensional university.

That extraordinary growth happened in the middle of the last century, fueled largely by veterans returning home from World War II with G.I. Bill benefits that paid for college tuition.

Temporary housing units brought to campus during the postwar period allowed the campus to accommodate the rapid growth. The Elliott Hall annex, erected in 1947 and razed in 1960, provided housing for 64 students.

On many campuses nationwide, enrollment doubled between 1945 and 1946. At Ball State, the increase was even higher. In May 1945, Ball State Teachers College had an on-campus enrollment of 550. By Fall 1946, enrollment had grown to 2,200 students, and almost half were veterans.

Ball State adapted to meet the educational needs of this huge influx, diversifying its curriculum, hiring more faculty, and increasing its degree offerings.

“Ball State changed permanently after World War II, and yet, it also symbolized the times in which it grew: forward thinking, largely positive in outlook, and optimistic for the future,” wrote the authors of “The Campus History Series, Ball State University,” published in 2018.

With enrollment soaring, the University created new housing and academic spaces, relying heavily on temporary buildings. Some of those buildings included repurposed military structures, including barracks and a Quonset hut.

The University even built a mobile home court to suit the needs of new students with families. In fact, 56 percent of those World War II veterans came to campus with spouses, and many couples had children, too.

The court later moved to an area near what is now the Worthen Arena. It closed in 1977. 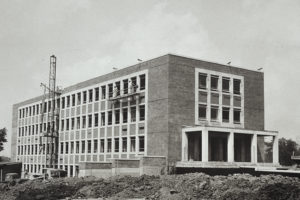 Classroom buildings were a focus of campus development to accommodate booming post-war enrollment. Such buildings included the Music Building, which opened in 1957, (seen here under construction).

By 1965, enrollment surpassed 10,000 students. In recognition of that status, the Indiana General Assembly agreed to rename the institution from Ball State Teachers College to Ball State University.

While most World War II veterans had long since graduated by the 1960s, they continued to play a role in the University’s sustained growth. That’s because the second wave was largely the result of their children’s generation, known as the Baby Boomers.

The campus’s physical growth matched enrollment with new buildings that helped shape the University landscape as it is today, including DeHority, Noyer, Woodworth, and Studebaker halls.

According to Jayson Jarrett, assistant director of Ball State Veterans Affairs, it’s not clear how many current students at Ball State are veterans. 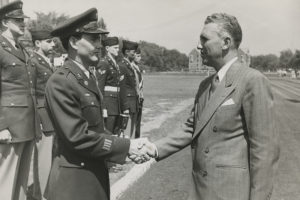 Veterans must self-report their status on admissions paperwork. It’s voluntary, however, and not all veterans do so.

Nonetheless, the University has earned recognition for being a “Military Friendly” institution from a publication called Viqtory. Additionally, U.S. News and World Report recognizes Ball State as being among the “Best Online Programs for Veterans” for bachelor’s degrees overall and master’s degrees in education.