In every production of “Dutchman” up until 2020, the character of Lula, a white woman, hands an apple to the main character, Clay, a Black man.

Devion played Clay in the Ball State production of “Dutchman” this past September. The apple is a reference to Adam and Eve, and it illustrates Lula’s effort to exert influence over Clay, to get him to drop his guard in a racially charged situation.

But the scene has since taken on additional meaning among the Ball State cast and crew. It has come to symbolize their undying devotion to the performing arts and their willingness to do whatever it takes to keep a show alive. That’s because—in the age of COVID—the cast and crew had to find a way to transfer the apple without physical contact.

It sounded more like a riddle, or an engineering problem.

“What do we do with this moment?” Ross said.

There were plenty of apple moments in the Department of Theatre and Dance this season.

By the end of this shortened on-campus semester, the students and their faculty mentors will have produced nine shows, despite the limitations of physical distancing. In a typical Fall season, the department produces 10 shows, according to Sarah Jenkins, the department’s managing director.

“What that says about our students and faculty and staff is that we don’t give up,” Jenkins said. “We press on.”

Each of those shows required naturally creative people to get even more creative, addressing challenges and solving problems that no one in performing arts would have predicted a year ago.

How do you convey emotion with a mask on? How do you dance without touching your partners? How do you make small theaters and a dance studio safe against infectious disease? How do you rehearse when a significant number of cast members are in quarantine or isolation?

“Our students have been great at rolling with the punches,” said assistant professor Joe Court, who teaches sound design. “We are figuring it out every day as we go.”

This Fall, the department has performed four productions in person, with social distancing and masks for both cast and the limited audience. Three more plays happened virtually over Zoom, the Fall dance projects will be presented digitally, and a final play, “The Gift,” will be performed livestream on November 22 at 7:30 p.m.

Dance students performed “A Modern Dance” inside Korsgaard Dance Studio with masks and social distancing, but the show was also streamed on the internet. 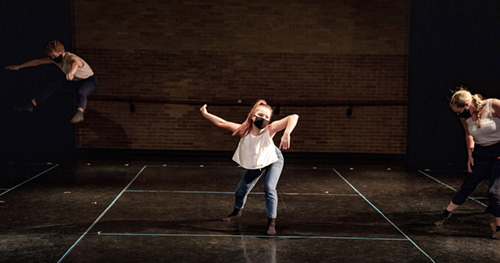 Students performed “A Modern Dance” while wearing masks for in-person and online audiences.

“We had about 75 or 80 people tune in for the livestream,” said junior dance major Carmen Gorsuch. “That was way more than we could have seated in our studio at one time. It was definitely a silver lining.”

Gorsuch began training for the dance season with masks this summer. She wore a mask everywhere, including on long-distance runs and during cross-training.

“We are ambitious people who have a deep passion for what we are doing,” she said. “I think I can speak for the whole department in saying we cannot live without art.”

The power of theater

But how did the character Clay get his apple?

They settled on this: Lula holds the apple out; the lights flash red, then go black; as the lights come back on, the apple is now in Clay’s hand.

In reality, Ross pulled a second apple from a bag. But to the audience, it looked almost magical, which made sense because Lula’s character held mystical powers.

“We didn‘t want it to just look like clever choices to avoid contact,” Ross said. “We wanted it to look deliberate.”

Ross described the pandemic as a blessing in disguise. He and other students learned how to use technology, how to perform in an online streaming environment, and how to overcome huge obstacles. They were able to do it all in the safety of an educational setting, where their livelihoods weren’t at stake. 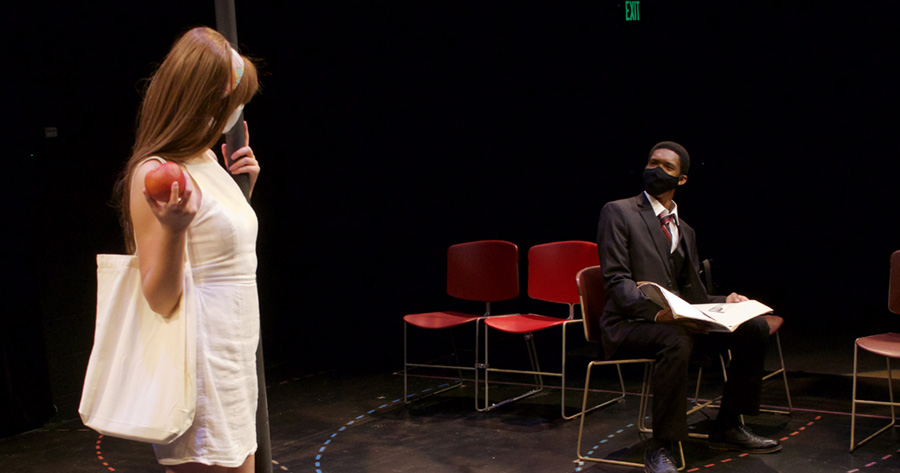 Creative choices had to be made to ensure safe social distancing on the “Dutchman” set.

They will leave college, he said, better prepared for a world where streaming performances and the intertwining of technology into live theater could become more prevalent.

The old adage, he said, is true. The show must go on.

“There are stories that must be told,” he said. “Theater can change your perspective on life. It can motivate you to do better, to fight for a cause. It can be a release from daily life. We can’t let the virus suppress the power of the performing arts.”

To see upcoming productions, buy tickets, and learn more about the Department of Theatre and Dance, visit their website.