Still, looking back, she wished she would have tried a little harder.

Jillian vowed not to make the same mistake in college. As a public relations major in the College of Communication, Information and Media, her goal at Ball State was to work hard, tackle life with a sense of purpose, and take advantage of every opportunity.

“I’ve had a great first year in Indy. I’ve met the best people. I have the best job. I know how lucky I am.”

Salesforce, named one of the state’s best places to work by the Indiana Chamber of Commerce for the fourth year in a row, helps companies develop tools to build stronger and better relationships with customers in marketing, sales, commerce service, and IT areas.

Jillian is a communications analyst for Salesforce. Her primary responsibility is to act as a liaison between the company’s IT department and its workforce. She explains systems and software changes in layperson terms and acts as an “advocate for the end user.”

“It’s internal communications and technical writing. I’m not working with clients or customers and I’m not in sales, even though the company is called Salesforce.”

Raised in St. John, just outside Chicago, Jillian’s dream was to work in the Windy City promoting arts, culture and entertainment.

But her career goals started to change after attending a networking event with Ball State students and alumni in Indy her junior year. There she met Brittany (Gerig) Campbell, ’09, who was also a public relations major at Ball State and is now internal communications manager for Salesforce.

A year later, that chance connection led to an interview and then a job.

In fact, Jillian had secured the position five months before graduation, which was a huge relief during her senior year.

“I never expected to move to Indy and work in tech,” she said. “But it’s been such a cool opportunity. My freedom, comfortable life and opportunities I’ve had in Indianapolis turned out to be everything I needed post-grad. I also love having such a huge network of Ball State graduates everywhere I turn in Indianapolis”

Opportunities for growth and fun

At Salesforce she also enjoys a culture of camaraderie along with perks such as unlimited paid time off, access to an office gym and coffee bar, programs that promote passion projects and volunteering, and company initiatives that encourage friendship and workforce equality. 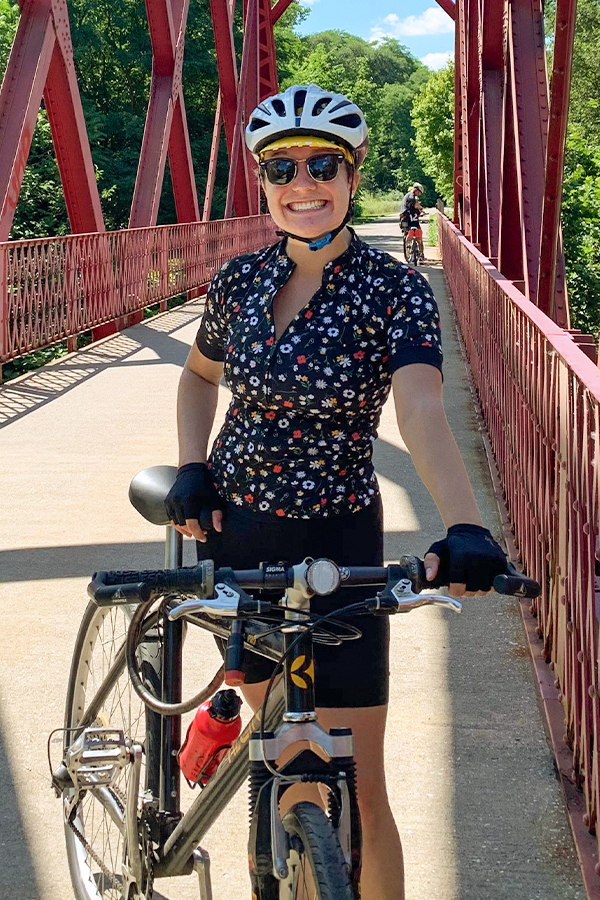 A quick perusal of her social media shows that Jillian also lives a full and active life outside of work, totaling up the miles on bicycle treks, dancing whenever she gets the chance, and generally seizing every day as a new chance for growth and fun.

It was that same spirit with which she approached her Ball State journey. In addition to her academics, Jillian worked for three years for Cardinal Communications, now called the McKinley Avenue Agency, and for two years as a student writer in the University’s Marketing and Communications office.

Kim Rendfeld, a senior communications strategist at Ball State who mentored Jillian in Marketing and Communications, remembers Jillian not just as a hard worker but as someone who met every assignment with enthusiasm and a sense of responsibility.

“I am pleased, but not surprised, she has enjoyed success early in her career,” Rendfeld said. “It is well deserved. She embodies how as Cardinals, We Fly!”