The project, which is under the direction of Mengxi Zhang and Jean Marie Place, health science professors in Ball State’s College of Health, will provide tailored health information with around 500 text messages translated into two commonly spoken Burmese languages within the Indianapolis Burmese community: Hakha Chin and Burmese.

Over the next few months, the professors will recruit Burmese women in the greater Indianapolis area, specifically those who plan to get pregnant within the year, who are currently pregnant, or who delivered a live birth during the past year. By August 31, 2021, plans call for the system to be used among at least 100 women.

Zhang points out, in the past decade, over 138,000 refugees from Myanmar have resettled in the United States, making the Burmese the largest group of refugees resettled to the U.S. About 19,000 of the refugees now reside in Indianapolis.

“Many new arrivals with refugee backgrounds have limited health care access due to linguistic and integration barriers, low socioeconomic status, perceived experiences of discrimination and racism from health care providers, and the stress of adjusting to a new country,” she said.

“A significant number of refugees are within the childbearing years, indicating an increased need for maternal and child health care services culturally tailored to this population.”

The project will increase the women’s knowledge about maternal and infant health. The goal is for the women to adopt recommended health behaviors such as safe sleep, breastfeeding, starting prenatal care early, and timely postpartum check-ups.

“Text-based messaging services are successful at engaging and educating pregnant and parenting women,” Zhang said. “Text-based messaging systems are especially productive among those with limited mobility and/or transportation barriers, as is the case with the Burmese refugee community in Indianapolis.

“Additionally, culturally tailored text-based messaging interventions are an effective approach to improve perinatal health outcomes and reduce noncommunicable diseases among various minority and underserved groups. Although a text-based messaging system for maternal and infant health exists in Indiana, messages have not been translated, tailored, or delivered to the Burmese community in Indianapolis.”

Their research found that a third of women did not receive timely prenatal care in the first three months of their pregnancy and the majority of these women didn’t realize the lack of early prenatal care was a problem. 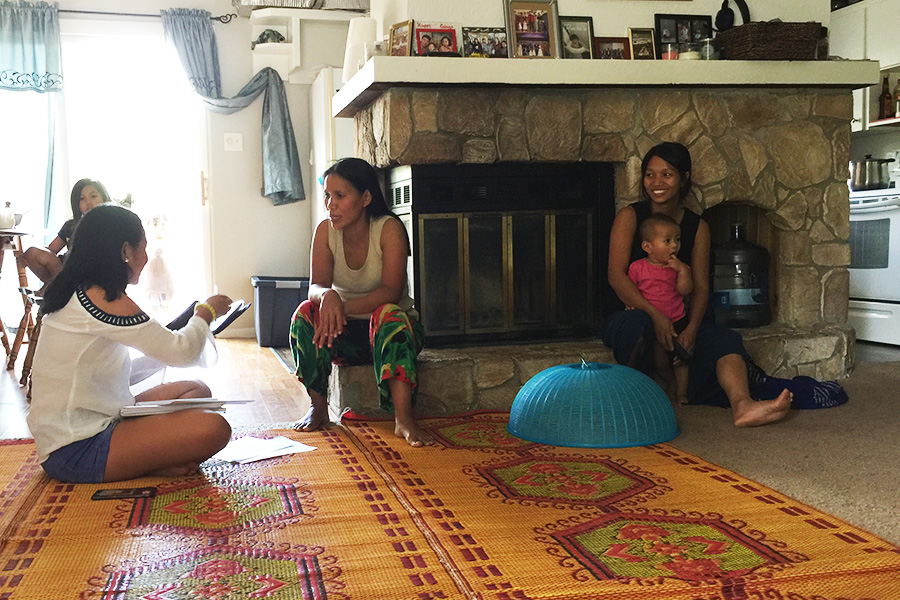 Having a paid job during pregnancy significantly increased the probability of receiving prenatal care during the first trimester, but only 20% of the women had a paid job during their latest pregnancy. Additionally, women reported lack of transportation, financial difficulties, and language barriers as obstacles to seeking health care services and receiving needed health care information, the research found.

Zhang and Place also are overseeing research components, implementation of the data collection, and dissemination procedures. They will also maintain communication and working relationships with external partners, including IU Health School of Medicine and the Indiana State Department of Health, which have assisted in providing sample text messages for perinatal health, and CreateIT Healthcare Solutions, which will help manage the text-based messaging system for the Burmese community in Indianapolis.

The professors are working with the Indiana Minority Health Coalition, Inc., which conducts research and training, develops policy, and creates and maintains a broad-based network of affiliate agencies, and the Burmese American Community Institute (BACI), a nonprofit organization that provides educational and vocational support to the Burmese community in greater Indianapolis.

On the national level, the study team aims to present the results in the North American Refugee Conference and publish the results in peer-reviewed maternal and child health journals. Finally, Drs. Zhang and Place will look for funding opportunities to ensure the continuous implementation of the text-message system in the Burmese community and expand this system to other needed refugee communities.