Armed with only an Excel spreadsheet and an Instagram account, he started a movement to use privately owned 3D printers to create masks and protective gear for first responders and healthcare workers in the San Francisco and Los Angeles area.

The 28-year-old put out a call on an Instagram account, organizing people with 3D printers.  Within days he was delivering newly minted equipment to organizations around the Bay Area.

“One of the best things I learned at Ball State was how to organize and create high functioning teams,” said Yener, ’15, who works at Siegel and Strain Architects in Emeryville, Calif. “Ball State is a huge part of my life. I learned about teamwork, getting people organized, and moving things forward.”

He joined forces with a few close friends to establish a local branch of the 3D Collaborative and creating a website, where they solicit donations to pay for materials and distribution of the masks. 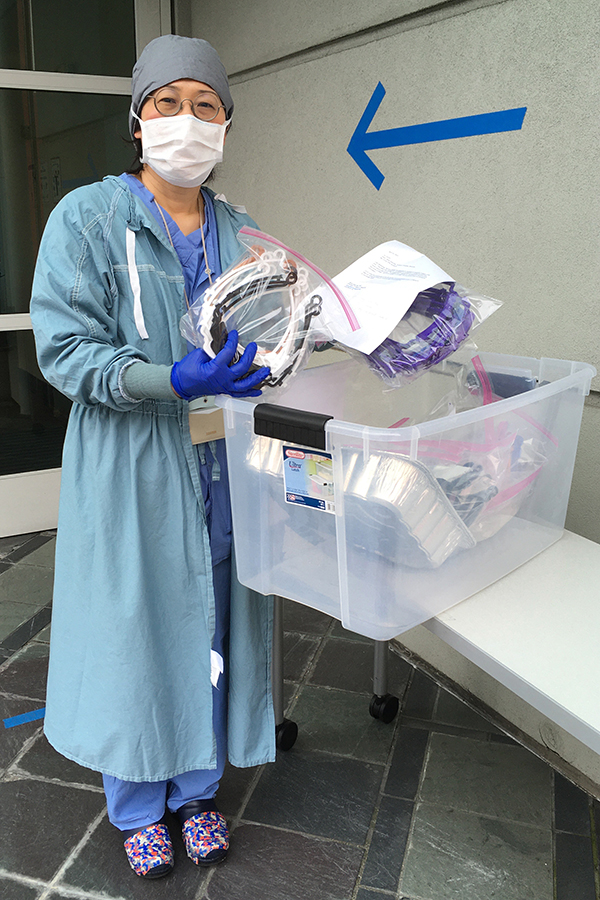 Yener and his wife, Tugce, recently delivered the first 100 masks to Zuckerberg San Francisco General Hospital and Trauma Center.
Yener said the project started after he saw news reports of architects and designers on the East Coast doing a similar work.

“Honestly, I was sitting at home talking to a friend on the phone who lives in Los Angeles and looked over and thought to ourselves that we have a 3D printer,” he said. “We wondered how many people also have them. We just started a spreadsheet and search for students and professionals in the design industry to join this effort.”

But, they key was organizing the movement, he said. So, the project created two teams that are printing the face shields while a third team picks them up to be taken to the sanitation group. A fourth team delivers new equipment.

While the project may be complex, Ball State’s Tim Gray, an architecture professor, believes that Yener is the perfect person to lead the group.

The pair met in 2010 when the skinny 17-year-old student from Turkey came to United States.

“Ege came to Muncie as a first-year student studying English, barely able to communicate, and managed to get himself accepted to the R. Wayne Estopinal College of Architecture and Planning, which is among the most rigorous programs on campus. And, he and flourished. He is simply amazing.”