Teachers College has landed a “Living Legend” to chair the Department of Educational Leadership.

Dr. Fen English hired into the position of chair and professor in June 2018.

“He is internationally recognized for his work and, as a result, brings immediate recognition to the Department of Educational Leadership, Teachers College, and Ball State University,” Interim Dean of Teacher’s College Roy Weaver said.

Fen, short for Fenwick, comes to Ball State with 57 years of professional experience, having served most recently as the R. Wendell Eaves Senior Distinguished Professor of Educational Leadership at University of North Carolina at Chapel Hill.

In 2013, the International Council of Professors of Educational Leadership named Fen a “Living Legend.”

A prolific scholar, Fen has authored or co-authored 43 books, 34 chapters and more than a hundred journal articles. In higher education, he has been a department chair at University of Cincinnati and UNC-Chapel Hill and a dean and vice-chancellor of academic affairs at Indiana University-Purdue University Fort Wayne.

Fen’s renowned career has been driven by an almost insatiable appetite for truth.

Fen grew up in Los Angeles, the son of two teachers. His idealism led him to first pursue a degree in journalism, specializing in photography.

Working at the “Los Angeles Times” while a student at University of Southern California soured him on the idea of a news career.

“I saw stories spiked,” he said. “I saw what the influence of wealth could do. I thought, ‘Where can I got to tell the truth?’ Being a classroom teacher looked pretty good.”

In K-12 education, he was a classroom teacher, assistant principal, principal and superintendent.

“I’ve been just about every role you can imagine in public schools,” Fen said. 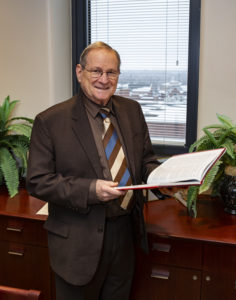 If the pursuit of truth seems too esoteric, consider this – parts of Fen’s career sound like a hardboiled detective novel.

One case involved Jersey City Public Schools in the 1980s. The district sued New Jersey state government, arguing it was withholding necessary funding. The state’s position was that the district was too crooked to be trusted. As part of a defense strategy, the New Jersey Attorney General hired Fen to audit the district.

Fen helped expose a culture of corruption and cronyism, graft and ghost employment.

“The mayor appointed his hacks to school-level positions,” Fen recalled. “That’s how he paid his political debts, with patronage. I would walk down the halls and see offices, but nobody was in them.”

Fen’s audit helped provide the basis for the state education department to take over the district.

A later assignment required him to investigate integration problems in public schools. Fen uncovered that minority students were being expelled at rates disproportionate to their percentage of the population.

“The school districts didn’t want the public to know that African-American students were being pushed out,” he said.

The investigation helped Fen write a book called “Curriculum Auditing,” which is still used by districts to address systemic bias.

A chair in the right spot

Fen’s academic research has focused mostly on finding the truth about what makes a good leader. He said society needs to move toward “non-heroic models of leadership” and quit basing theories after people like charismatic military leaders.

“You don’t want Napoleon to be a high school principal. You know what I mean?”

Fen said he came to Ball State for the opportunity to work in an exemplary department at a well-respected university. The position also offered him time to continue his research into leadership.

“I’ve been a dean. I’ve been a vice chancellor,” he said. “Even though I teach leadership, being department chair is about as far as I want to go, because you can still retain your research interests.”

The world-renowned leader on leadership said he has been impressed so far with the character of the Teacher’s College faculty.

“The faculty here really care about the students,” he said.

Education: Bachelor’s and master’s degrees from the University of Southern California; Ph.D. from Arizona State University.

Recent research/publications: Fen has authored or co-authored 43 books, 34 book chapters, and more than a hundred journal articles. In 2016, he finished “Leading Beautifully: Educational Leadership as Connoisseurship” with co-author L.C. Ehrich.

Previous Indiana experience: Between 1995 and 1998,Fen was a dean and a vice-chancellor of academic affairs at IPFW.