Five Ball State University historic preservation and architecture students studied, measured, and created a historical record of the 1862 Southgate Schoolhouse in West Harrison, Indiana, one of the oldest township schoolhouses with such a high level of integrity still standing in Indiana. For those efforts, the team won second place in the 2018 Charles E. Peterson Prize Competition.

The team’s work is now part of the Historic American Buildings Survey collection at the Library of Congress. If the building were ever damaged or destroyed, the document could offer construction guidance on every dimension.

“I feel honored to have received second place,” said Ashley Danielson, who earned her master’s in historic preservation while on the project. “We were competing against other top-notch schools across the country, but our team worked tirelessly to create a high-quality set of drawings. Now our drawings will contribute to the Library of Congress and aid in preserving a piece of Indiana’s history.” 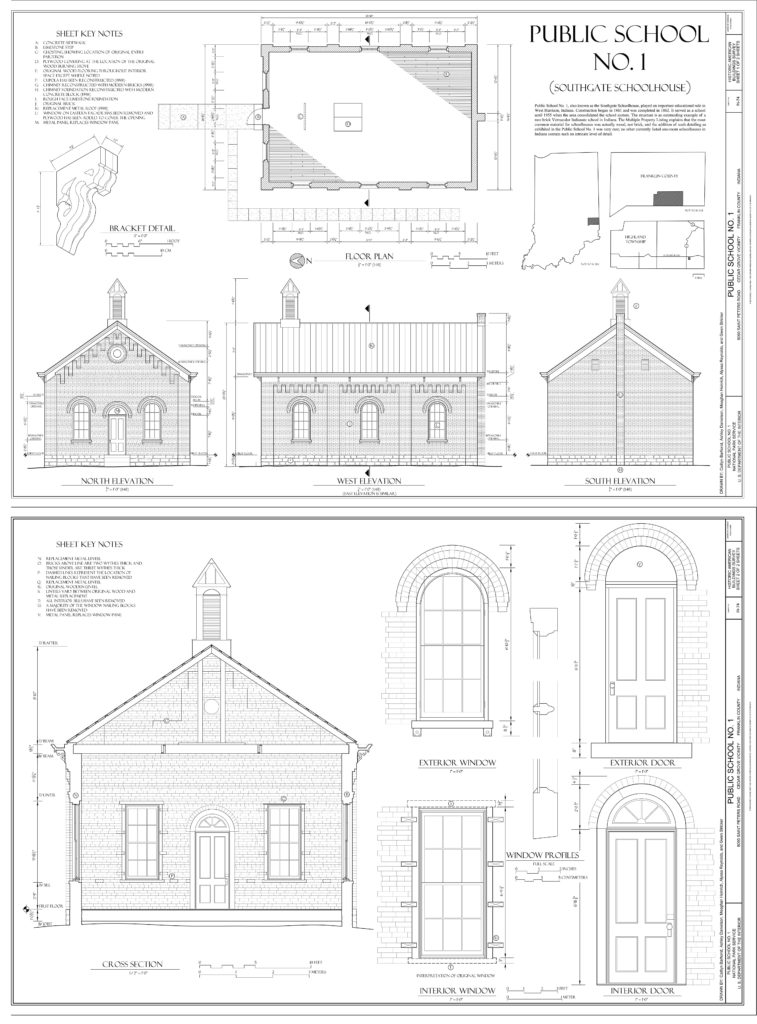 The project was personal for Caitlyn Barhorst of Lubbock, Texas, who earned her master’s in both architecture and historic preservation while on the project. Barhorst’s great-aunt has owned and maintained Southgate Schoolhouse since 1972, and taught in the surrounding community four decades ago.

“The schoolhouse reflects how many lives the women in my family have changed because of their passion for education,” she said. “It’s a great honor to know that this piece of my family’s history can be shared through our team’s hard work.”

The student team spent an entire semester preparing a submission for the competition, which awards $2,000 to $5,000 for outstanding measured drawings of historical places and aims to heighten awareness and appreciation of the nation’s historical buildings.

Each student poured passion and dedication into the project from start to finish: First they compiled historical research about the Southgate Schoolhouse, and then drove two hours to measure every inch of the building’s exterior and interior. After collecting the detailed data, the team intricately sketched the building and its measurements.

The team’s mentor is Jonathan Spodek, professor of architecture.

“We have terrific students in our department,” he said. “They always work hard. Their second-place win in a national competition is just one way of acknowledging their work.”